What’s up guys! Corrosive Logic here with another Deck guide! Today I am featuring a Miner control Deck, with the Battle Ram and the Poison. 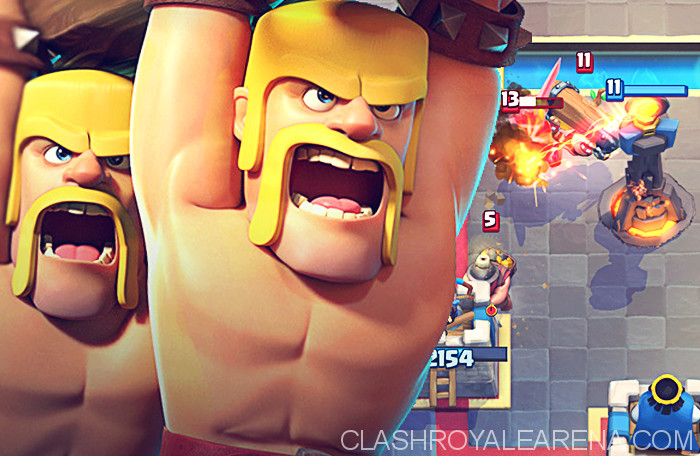 I found this Deck by watching pro player Rob Stark win a 1k Tournament and also get multiple 12 wins in grand challenges, but to my knowledge this deck was made by Coltonw83.

I also played tried this Deck and came 3rd in a 200 man tournament, but perhaps it was luck as I’m not the best at this Deck (Rob Stark), anyhow I will try and explain how to use the Deck as best as I can and at the end I will show you the interview I had with Rob if you want some more detailed explanations.

Proof of winning the tournament: 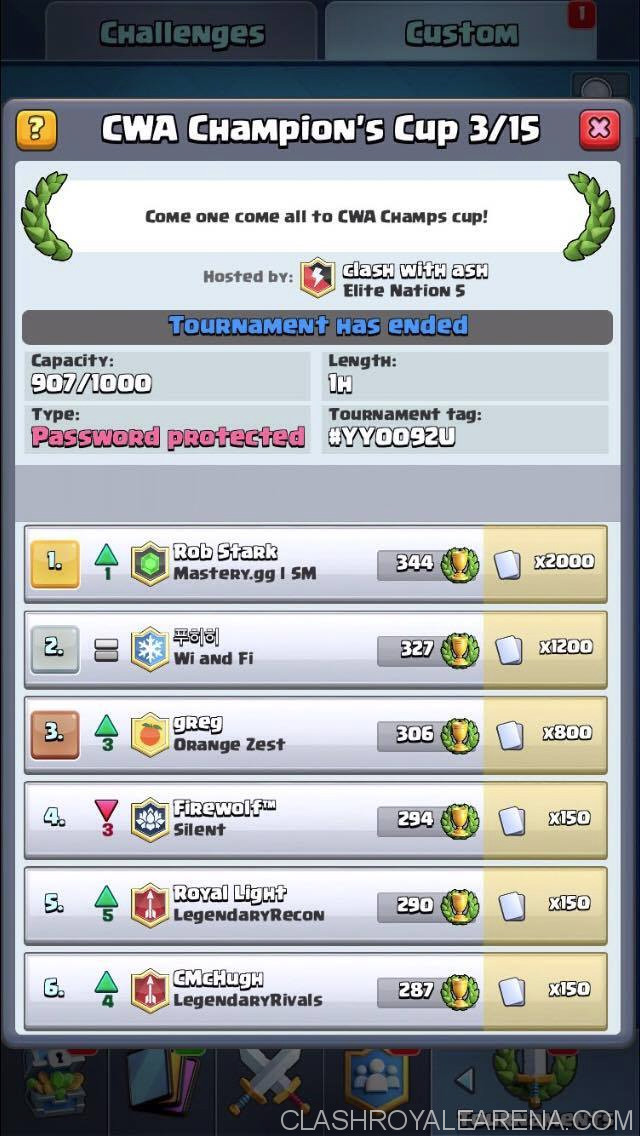 Miner – This is the decks main win condition. The Miner is used for chip damage, taking out pumps, and tanking for troops such as battle Ram or Electro Wizard.

Battle Ram – The battle Ram is the secondary win condition, you might not get it to your opponents Tower often but the two spawned Barbarians are great at taking out their counters.

Poison – This card is great against any Deck. In the current meta a lot of support cards can be killed by Poison for example Electro Wizard, Archers, Minions, gob Gang.

Knight – A solid defensive repertoire, a must need in many decks.

Skeletons – Skeletons are great for positive Elixir trades and high DPS for a cheap 1 Elixir.

Electro Wizard – Probably the best legendary in the game right now and possibly even the best support card.

Inferno Tower – Commonly used in control/bait decks, the  Inferno Tower is a must need against beatdown decks to compensate for the low damage per push in a control Deck.

For the legendary Log and Electro Wizard, a possible F2P replacement would be Zap and Musketeer, respectively. The Knight can be replaced with the Bandit in some Deck variations, more offense less defense. Rob actually plays the ice Spirit instead of Skeletons in the 1k tournament (I think), but he’s using Skeletons in GC. This Deck is also commonly played with Goblin Gang instead of Skeletons.

Traditional Miner control decks have always done well against Golem and Lavahound beatdown. However, in the current meta Balloon and Lightning have been causing control players immense problems. Players could simply ignore your Miner push and continue adding support units to feed their massive push.

But in this Deck, the Battle Ram is a card that MUST be reacted to.

So basically when they play a Golem at the back, you could push with the battle Ram on the opposite lane so that they have to defend and have less Elixir for their big push.

Early on in the game, establish what your opponents Deck is, then push accordingly. You are looking to go with the Miner battle Ram, but if your battle Ram isn’t getting to the Tower then use battle Ram Miner so that your Ram tanks for the Miner. You can practically counter push with any another support unit by simply using the Miner to tank for it.

Don’t Miner Poison unless you can get value out of the Poison. Remember above I mentioned all the different popular support units  that can be killed by the Poison.

This control deck is quite good against Golem beatdown, but may be slightly weaker to air troops.

Once they play their tanks at the back you can rush the other lane with Battle Ram Miner, forcing them to divide their push and even enabling you to deal lots of damage.

The Miner is also a brilliant Elixir Pump counter, send the Miner in to take out their pump. If they use something to counter it then you can Poison the troop, the pump, and your opponents Tower. Taking out Pumps is crucial against beatdown decks so that they don’t have a massive push coming.

If you can divide their push then you’ll have an easy job defending with the Inferno Tower. Place the Electro Wizard on the other side of the push so that they get less Lightning value. Don’t be afraid to use the Poison defensively to take out their support units.

Your Inferno is enough to counter lots of Hog pushes. A good Hog player will try and outcycle your Inferno so be ready for that. Remember combos with Electro Wizard and another card will usually completely shutdown a Hog too.

This can be a bad matchup if they catch you off guard. Against Xbow the Knight is a cheap tank, also the battle Ram is great at taking out Xbows. I don’t recommend using Inferno to counter xbow unless they don’t have Electro Wizard or if it’s out of cycle. It’s a gamble because if they managed to get other troops in front of the xbow, the Inferno will lock onto the xbow too late.

This is the toughest matchup for this Deck. Use the Knight to tank Skeletons and Log them when enough have surrounded the Knight. Electro Wizard is also a good Graveyard counter but it can be killed by Poison. Use your Inferno to take out the tank.

In the current meta, the Knight is in so many decks, and it’s one of the best counters to the Miner. The reason it’s so good at countering Miner is because it only costs 3 Elixir and it can’t be killed by Poison or Fireball.

Cards like the Knight will be used to counter your Miner, so it is essential that you vary your Miner placement everytime. If they use another troops with the Knight, for example Electro Wizard, then it’s ok to use the Poison as you will get value.

It’s interesting that both of this deck’s win conditions can be played defensively in emergency situations. The Battle Ram can tank multiple shots and the two Barbarians are obviously going to do work on defense.

What is your favorite card and why

My favourite card is X-bow, it’s just satisfying to win with as it requires you to understand your opponent’s cards and counters well to be able to win.

What made you play this Deck in CWA Champs Cup? Under what circumstance will you deem a Deck good enough to take to a big tournament or grand challenge?

Battle Ram seemed like an underrated card at the time, and I wanted to see how it would hold up in a competitive setting. I had won a few GC with it prior to the tournament, so I knew it was decent at the least. But it’s hard to tell exactly how it’s going to do until you test it in the right environment. Generally I’ll want to win a few GC in a row with a Deck before I consider it for competitive play.

What sort of decks/cards counter this Deck, and what do you do against them?

Lavaloon is probably the hardest match up for this Deck, you have to apply good pressure on the opposite lane of the Hound, and make sure you still have Elixir to defend with Inferno. Sometimes it will come down to who can 3 crown first.

Under what circumstance will you push the opposite lane?

Good times to push opposite lane are whenever your opponent makes a good size investment at the back (preferably 6+ Elixir but can do with 5). If you’re playing against a control type Deck you’ll probably want to go same lane though

Do you have any general tips for using this Deck?

Don’t go all in on pushes early until you understand their counters. Only play battle Ram at the bridge unless you’re using it defensively. If they’re countering battle Ram well send that in before Miner so it tanks for the Miner.

How would you recommend someone getting better at the game, do you think that your skill came from playing a lot, or is it more natural talent?

Getting better at the game involves two main things: repetition and learning. When trying a new Deck you need to get as many reps as possible, but you also need to learn from your mistakes along the way. Share replays asking for advice, but also look at them yourself and figure out all of your mistakes, and what the correct play would have been.

A lot of mistakes come from not knowing or recognizing the correct play fast enough. If you can figure out how you’re supposed to react to the popular Deck types, you’ll be able to minimize some of your mistakes.

Any tips for playing in tournaments?

For me, I try to play as many games as possible. But if I find myself tilting, I’ll take a small break before starting again, to make sure my head is clear and I’m not rushing into it. Better to wait a minute and refocus instead of taking another L.

I also have Rob Stark’s gameplay and Deck breakdown in a video below, so check it out!

This is a very solid Deck that works very well against every Deck besides possibly Graveyard and Lavahound. There’s no doubt that a lot of practise went into this Deck before it got used in challenges and tournaments.

A big thank you to Rob Stark for helping me make this guide, also I would really appreciate it if you could check out my video, as it encourages me to continue putting my time and effort into these guides! 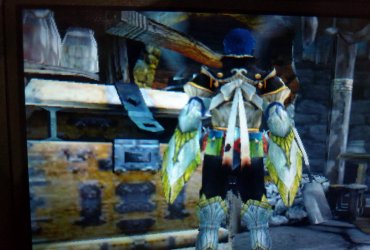 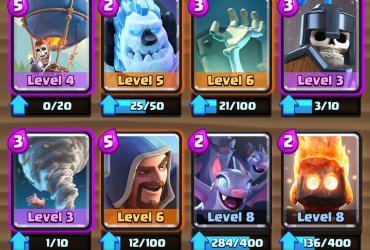