Hello Clashers! KairosTime here, with a new Balloon Poison deck that does really well despite it not having a Giant or Lava Hound! This deck is super hard to counter if you set your push up correctly! This deck comes with a video guide on a YouTube series called “Exploring the Meta” that you can find it below! Feel free to check out my YouTube Channel for more video guides! 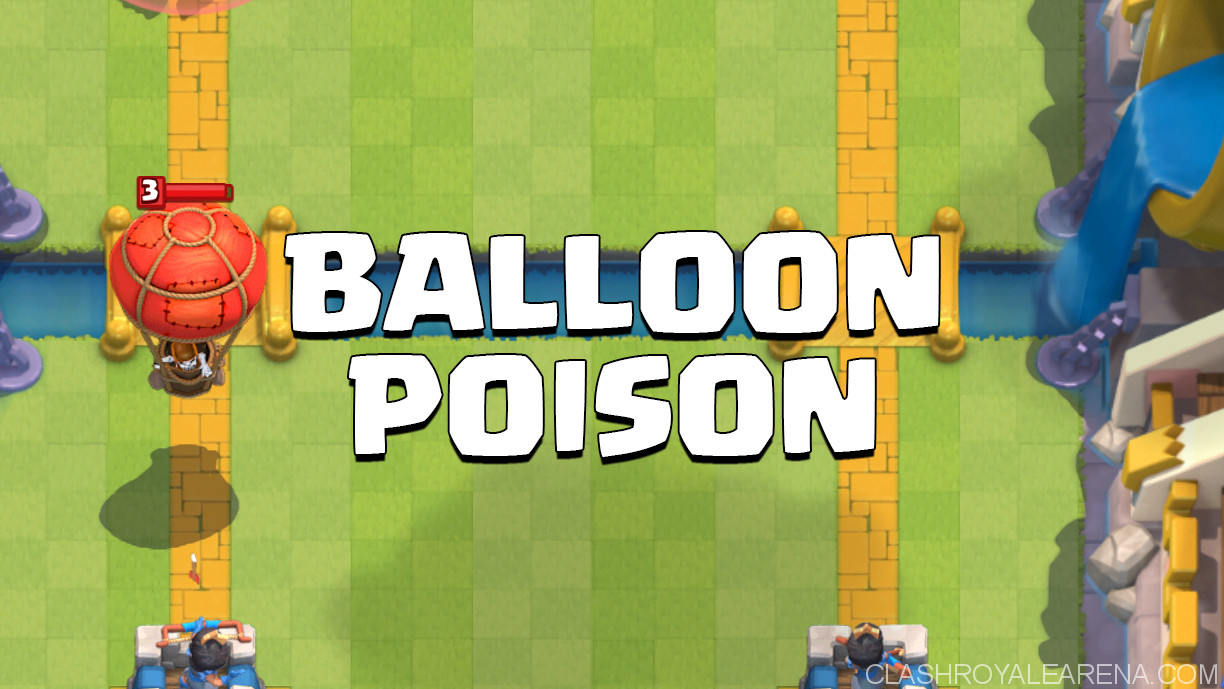 Balloon Poison Deck for Arena 7, 8 and 9

Poison – Poison is such a powerful card and now that it is confirmed that it won’t be receiving a nerf, this deck will be just as strong! After the update, it might be beneficial to switch the Poison for the 2 cost Rage, especially for those of you that have a higher leveled Rage. That being said, I love using poison in this deck because it slows down the attack speed of defending troops. This gives your Balloon more time to reach the tower. In addition, the Poison spell is the ideal card to clear a defending Minion Horde if the Baby Dragon is included in your push. One breath of the Baby Dragon on Minions that are in Poison will clear them, which gives you a huge advantage. Poison is also a great card to use on defense, but I would recommend trying to defend with other cards so you can use it on offense. The 4 cost Poison denies Elixir Pumps 4 Elixir, so if you can also damage your target tower, it might be beneficial to Poison Pumps, especially if you can also get an enemy troop included in that Poison radius.

Baby Dragon – The Baby Dragon is a very strong card in this deck because it is unique in that it is a mini tank that flies. Since it can do splash damage, it makes for an ideal card because it can easily take care of Minions and even the Minion Horde. If you don’t have a high leveled Baby Dragon, you can switch it out for the Wizard, but do know that the Wizard will require a different playstyle to make this deck work. The Baby Dragon is a great card on defense because it can target troops that can’t target it. That allows for it to often times have full health after defending, making it perfect for counter-pushes. When it comes time for a counter push, use the Balloon as I described above. If you don’t have a big enough elixir advantage to drop a Balloon, you can do a mini push with the Knight or Minions. If you go for the Knight, try to use him in front as a mini tank. If you go for the Minions, place them to the side and slightly behind the Baby Dragon so that a defending Ice Wizard or Princess won’t clear the Minions along with the Baby Dragon. Ideally, the tower will target your Baby Dragon and the minions will deal with other troops and eventually the tower.

Minions – The Minions are an essential card in this deck. They are great on offense and defense and can even be used to do a little Balloon push if your opponent is using a defensive tower. I recommend using them mostly on defense against other Minions, the Mini PEKKA, and even a Miner Distraction push. That being said, they do not distract ground troops like the Mini PEKKA so be careful about relying on them as your only defense. On offense, the Minions can do a really good job at covering a balloon so that an enemy Musketeer will target the Minions instead of your Balloon. If your opponent is running the Inferno Tower, make sure you place your Minions near the middle of the arena when your Balloon is about to cross the bridge so that the Inferno Tower doesn’t lock on to the Balloon. Since this deck doesn’t have anything to reset the target of an Inferno Tower, Minion placement can be the difference between a loss and a victory.

Knight – The Knight is your “surprise” card in the deck. Because he’s not used a lot, people aren’t familiar with how to counter him. That being said, not too many are familiar with using him either, so make sure you practice using him. He has a medium walk speed which is the same as your Balloon but is slower than the fast Baby Dragon so make sure you place him right. I love to use the Knight and Baby Dragon to protect the Balloon from 2 sides by placing the Balloon in the back of the map. Then, when the Balloon is near the bridge, you can place the Knight and Baby Dragon so that they are to the left and right of the Balloon or in front of and behind. This makes it very difficult for your opponent to target the Balloon, which they will desperately try to do. He has a ton of health for only 3 Elixir so you will want to use the Knight as a tank. I will use him to take care of attacking Mini PEKKAs or other troops. Because he has a fast attack speed, he also does a good job at clearing smaller troops like archers and spear goblins, which are both a problem for the Balloon. Because this deck doesn’t use the Giant like a lot of other Balloon decks do, you will want the Knight as your mini tank.

Guards – The guards are the obvious choice when it comes to defending against ground troops like the Mini PEKKA, Lumberjack, or even a lone Hog Rider if you can afford some damage to your tower. If your Guards aren’t leveled up high enough to use in your trophy range or in tournaments, you can replace the Guards with the Minion Horde, Goblins, or Valkyrie, but if you change that out, you will need to modify the way you place the deck. The Guards are so good on defense and can also be a huge help on offense if your opponent has the Musketeer, Ice Wizard, or Princess. I also love the Guards because they can easily stop a lone 7 Elixir PEKKA for only 3 Elixir. Because of their ranged attack, they are also a great option against a Valkyrie who takes 4 spins to finish off the Guards if your placement is good.

Elixir Collector – The Elixir collector is a very important part of this deck. It allows you to force your opponent to go on the offense so that you can defend on your side of the tower while preparing for your own attack. Don’t feel like you have to have an Elixir Pump up in order to make a successful Balloon push. The Elixir Collector is here to supplement your win condition, and isn’t a requirement for it. That being said, you should make sure you learn where to place the pump for the best advantage. You should also try to protect your Elixir Collector from enemy Miners. This is where your guards come in to help. If you can protect your pump, you will be ready for a massive push that your opponent simply won’t be able to stop!