Hey guys, D-mate here. Today I want to share with you a unique Deck: Balloon Freeze.

Rarely seen in the meta, this deck packs a surprising punch.

I will do my best to describe the most common playing styles, but every Deck plays differently, and there are thousands of different Balloon Freeze decks.

Without further ado, let me get started! 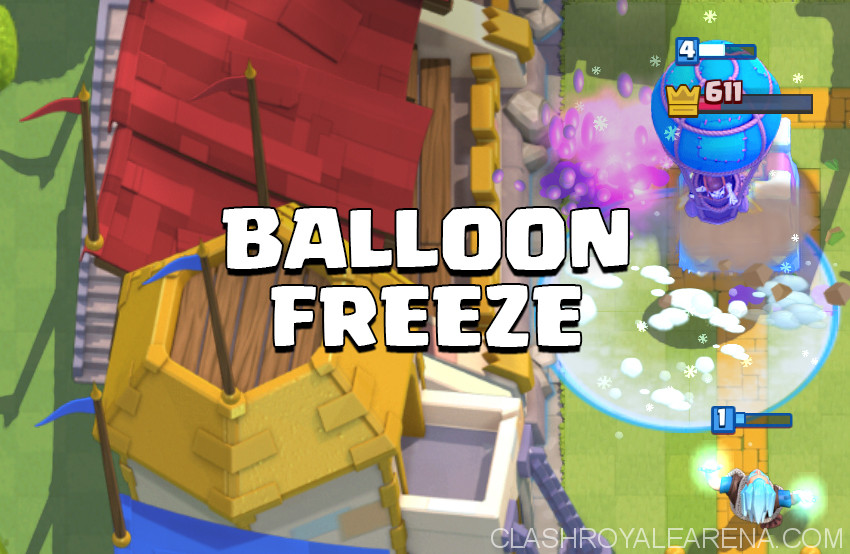 The Ultimate Guide to Balloon Freeze

This Deck is pretty rare in the meta. You may have never seen it, or even heard of it! Because of that, let me share some reasons on why you may want to try this out.

It is very surprising

Rarely do you ever have a Deck with a Balloon as the main offensive unit. Sure you have Lavaloon and Giant Balloon, but with those Balloon has a lot of support, and is equal partners on its strength. Here, it’s all Balloon, all in. Your opponent may be surprised at seeing a single Balloon and put out a sub-par defense. And you can bet they won’t be expecting a Freeze!

Any good Balloon Freeze Deck will have many offensive threats and offensive answers to threats. Using multiple air units for a flawless defense creates a strong counter push when paired with spells or units such as the Miner. You may not have an answer to everything, but you can be sure the same applies to them.

It packs a punch

The Balloon is a great unit for offense. Not only does it have insane damage per bomb, but the death damage is also insane, equal to Arrows on units or a Fireball on the towers, so even failed attacks have some power to them.

This Deck is all about reaction speed, and a masterful Balloon Freeze player will have this down to the wire. Minions? Pre spell! Glass Cannon? Miner Zap! Inferno Tower? Zap Freeze! No matter what the card, a skilled Balloon player can shred it to pieces.

Of course, every Deck has its downfalls, and Balloon Freeze is no expectation. Here are some things to consider when deciding whether or not you should try Balloon Freeze

It is hard to play

You will be putting on a lot more effort than current meta decks. It’s not just Ebarb cycle Zap win. Every play takes an immense amount of effort, and playing it incorrectly can result in crushing losses. This makes Balloon Freeze a very hard Deck to get into without a lot of trophy losses and time

It has poor ground/air troop ratios

On defense, it may feel clunky in a sense, because you have such little units to defend ground units with compared to other decks. You’re depending on 1-2 ground units for support, which can get troublesome against Ebarbs, Hog, and other common win conditions.

It requires a finicky play style

There aren’t many people who can properly play a good Balloon Freeze decks. They need to be working on always changing how they defend and attack without too many cards that can be played in different ways. Hog Freeze can do this much easier with unique Hog plays, but the Balloon is different. It’s a slow unit with mediocre HP, and there are few ways to get it to the Tower. Being creative will definitely help you with this Deck.

As with the Hog Freeze guide, now I’m going to go over how to play a Balloon Deck. But remember, every match is different, and this is only an outline.

This is when you analyze their deck. Unless you can’t avoid it, I would advise against showing either your Balloon or your Freeze spell.

The Balloon packs some serious punch, and if they have a counter, you want to be prepared and not waste the element of surprise.

The good thing is most Balloon counters are versatile and used in many ways. It’s not uncommon to see Minions and glass cannons used on your cheap counter attack units, so take inventory

Now you want to use your Balloon and get a cycle going.

The first push should come from a counter push and not overextended. Here you want to show them your Balloon and hopefully use your prepared counters to their defensive units to get the Balloon to the Tower.

Unless your Balloon has a substantial amount of HP left, say 1/4, don’t show your Freeze. If you keep them on there toes all game you can pressure them into a loss.

If your Balloon does have enough health, it is often worth a Freeze, even if it is just for one or two extra hits, that can be more then enough to win games, thanks to the 500+ bomb damage + death bomb, but only do this if it is worth the loss of a surprise tactic

Now your going to get creative.

They know you have the Balloon and that you are prepared for there counters.

This can lead to difficulties with preparing for there defenses, because they will expect you to prepare for them. However, you should be ready for anything. Anticipate there choices and prepare.

For example, if you pre-Arrows Minions last time, they will probably place them at the bridge next time. That’s why you throw in a few Fire Spirits or place those Arrows away from the Tower.

Your main goal is to get the Balloon to the Tower with as much HP as possible. Because of this, early Freeze becomes a viable option.

For example, if your Balloon has half health and just takes out an Inferno Tower, freezing then works well to guarantee Tower damage and prevent things such as Fireball from ruining the push

Here you should be just chip cycling. Follow all the rules of child cycle decks: apply light pressure, don’t slow down, don’t try to do a knockout push, spells are your biggest friend.

Make as many Mini pushes as you can for quick little bursts of damage until your spells can deal with it.

You want to keep them forced to stay on the defense for as long as possible and not allow big counter pushes until you can crush there Tower.

Now I’m going to be sharing with you a Balloon Freeze Deck.

Remember, everyone plays differently, and there is no “right” variation. These our guidelines for making a decent Hog Freeze Deck

Hard to have a Balloon Freeze Deck without em!

For this there are a few common choices: Arrows Zap, Lightning Arrows, and Lightning Zap. These spells each have their own uses. Arrows work great for eliminating Minions, the most common Balloon counter, Zap works well for retargeting units and being a soft counter to the Inferno Tower. The Lightning takes out glass cannons, Mega Minions, and Inferno Tower, but doubles the push cost.

One of the balloons biggest weaknesses is its slow movement speed. Luckily, every other air unit in the game (other than the Lava hound) has a much faster movement speed. Thanks to the balloons large size, this can be used to push the Balloon forward. Because of this, you should carry at least one. I suggest you choose from either Minions, minion Horde, and the baby Dragon.

This should fill in to counter units like the Mini P.E.K.K.A and Elite Barbarians, which need distractions. Depending on your defensive unit, there are different cards I would suggest. If you chose the Inferno Tower, you want a swarm unit. Guards and Goblin Gang work well because the have a better spell immunity so that they aren’t just a spell away from being dead. If you chose the Tombstone or Cannon, you want preferably a swarm unit and a Mini tank, but if not, the Mini tanks is more important. I would suggest ice Golem, Mini P.E.K.K.A, or Prince.

Here is the Deck I made for using Balloon Freeze. However, everyone plays differently, and this Deck is not a one-size-fits-all. Keep this in mind when considering substitutions.

Thanks for reading! As always share any questions or comments down below and I will be sure to get back to you. D-Mate out! 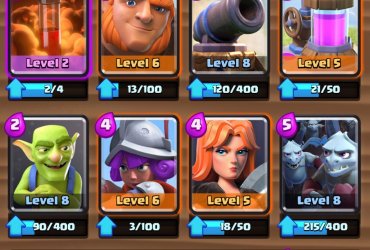 Hello my friends, If you are getting struggled while pushing to Legendary Arena 0 Arena 8, I would love to introduce this free-to-play deck to you guys! This is an … 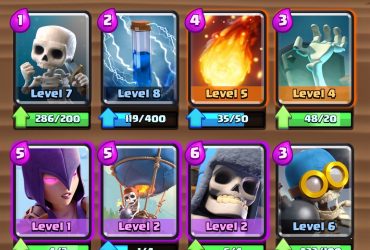 This is definitely the one of the most interesting Clash Royale decks I have ever tried. Looks very stupid but trust me, it does work very well, especially at Arena …