Hey there guys, In this post, I am going to show you an impressive Royal Giant Deck that Got me to Arena 8. As Royal Giant is going to get a buff in the upcoming update, which helps him outrange most defensive buildings in Clash Royale, I am pretty sure this card is going to be popular soon! Moreover, most players haven’t used or even haven’t faced Royal Giant yet so I think it is definitely worthwhile to give this guy a try and surprise your opponents!

MonadPlays shared this deck a few days ago and I have found it to be very impressive in the current game meta with lots of Hog, Bomb Tower and P.E.K.K.A Double Prince Decks! And it is going to be much better after the next update! This deck can counter almost every deck in Arena 7 and early Arena 8 (I can’t push to 3500+ trophies with it because of low card levels). In my last 40 games with this deck, I got 30 wins, 4 losses and 6 draw, which is very impressive!

Royal Giant: This is the main tanker and the key of this deck. My strategy is usually to place support troops behind the Crown Towers to clear opponent’s push and surprise him with Royal Giant when my support troops reach the River. Royal Giant can easily take down Towers and Buildings. 2 Royal Giant in x2 Elixir time is quite unstoppable.

Valkyrie: She is an ideal troop in any Royal Giant push. She deals splash damage making short work of Goblins, Barbarians,… She is pretty tanky and can easily clear Bomb Tower, Double Prince,… On defense, she is great against almost every push. Just place her behind opponent’s tankers and she can finish off all support troops quickly.

Musketeer: Place her behind your Royal Giant to make the most of it. When gets protected well, she can deal loads of damage to the Towers. She is also very great at dealing with Baby Dragon, Cannon and many other troops.

Fireball: This is definitely one of the most useful cards in Clash Royale. Fireball helps you deal with P.E.K.K.A pushes, Barbarians, Minion Horde, Three Musketeers and swarms. Sometimes, you just need a few damage from your Fireball to finish off a Tower. I posted an ultimate guide about this stunning card before. You can take a look at here for more tips!

Mini P.E.K.K.A: I use this sneaky troop in this deck to devastate when it gets ignored. I use it as a sneaky push most of the time behind my Royal Giant. On defense, he is also great at countering Hog Rider, Giant, Giant Skeleton,…

Wizard: Wizard is the key support behind Royal Giant in this deck. He deals tons of splash damage and takes out Minions, Barbarians, Goblins,… quickly to protect Royal Giant.

Goblins: Hands down Goblins are very popular in Clash Royale and we all know what they can do. They are great at dealing with Hog Riders, Musketeers,… I usually use them to distract opponent’s troops and to sneakily deal ample damage to opponent’s Towers.

Zap: You can use zap to take out Goblins, Skeleton Army, Minions,… Zap is also used to stop charging Prince and reset X-Bow, Mortar and Inferno Tower’s target.

Hog Rider Decks: It is pretty difficult to deal with Hog Freeze and Hog Zap decks, however after the first Hog Push, you can easily defend and counter-push. You should drop your Mini P.E.K.K.A immediately once the opponent drops his Hog and be vary of the Freeze Spell. When your opponent drops his Freeze, quickly take out that Hog with Goblins and launch a counter-push. Sometimes, you should Zap the running Hog Rider to halt it and remove support troops nearby such as Goblins, Skeletons,…

Hut Decks: Hands down, they are one of the hardest decks I have faced in Clash Royale as they quickly take out my Royal Giant and keep spawning troops. The best strategy to defeat these decks is to use Fireball wisely. If a big push is coming your way, use Fireball and Zap to clear it. Otherwise, you can use Fireball to reduce the lifetime of Huts. If your Royal Giant can’t deal damage, you should push with your Mini P.E.K.K.A and Valkyrie, followed by Wizard. When you think you just can’t win the game, play for a draw!

P.E.K.K.A Decks: It is pretty easy to play against these decks as you can outplay them with cheap counters. Valkyrie will easily take out Double Prince, Musketeer, Goblins,… behind P.E.K.K.A and your tower will have enough time to take down P.E.K.K.A by the time it is at your Tower. Use Goblins to distract P.E.K.K.A and even Mini P.E.K.K.A would be great too as he can deal loads of damage to P.E.K.K.A. You should always keep the Fireball in your hands to clear Wizard, Bomber, Archers, Spear Goblins, Musketeer,… behind P.E.K.K.A then take the P.E.K.K.A down with your Goblins and start a counter push.

Mortar Decks: Mortar decks are one of the most used decks in this game meta. While playing versus Mortar Decks, you should cycle quicker than them and force them into playing defensively. Clear the Mortar and buildings nearby with Goblins, Musketeer and Valkyrie before lauching a counter push. Once you have a push going, you will almost always take down at least 1 Tower. After that, you can play defensively during the rest of the game.

Golem + Wizard: This is a very easy matchup as you can counter the 13 Elixir push most of the time with just 8 Elixir. Use your Valkyrie right on the Wizard and play Mini P.E.K.K.A/Goblins to deal with Golem. After that, launch a counter push with your huge Elixir advantage.

You can watch this video to see how MonadPlays deal with some popular matchups:

Okay guys so that’s all about this Royal Giant Deck! I hope you guys really enjoyed reading and will get a lot of trophies in the future with the Royal Giant! Good luck my friends! 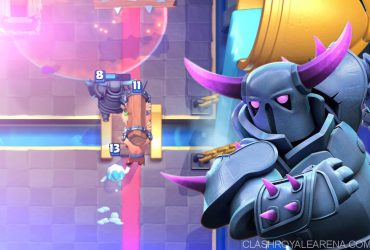 Hey guys, SCorpSCilla here, back at it again with a brand new 2v2 deck. With 2v2 battles, it is easy to crush your opponents with large pushes, or vice versa, … 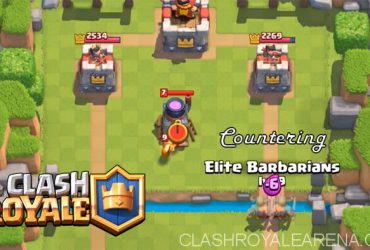