Hello guys, today I am going to show you a new stunning Arena 8 Deck which contains only cards from Arena 4 and below. Sounds great? Also, it contains one of the best combos in game – Hog Rider + Freeze. This combo was shared by Justin. He is the leader of “The Elite”, which is ranked at #5 in the U.S. 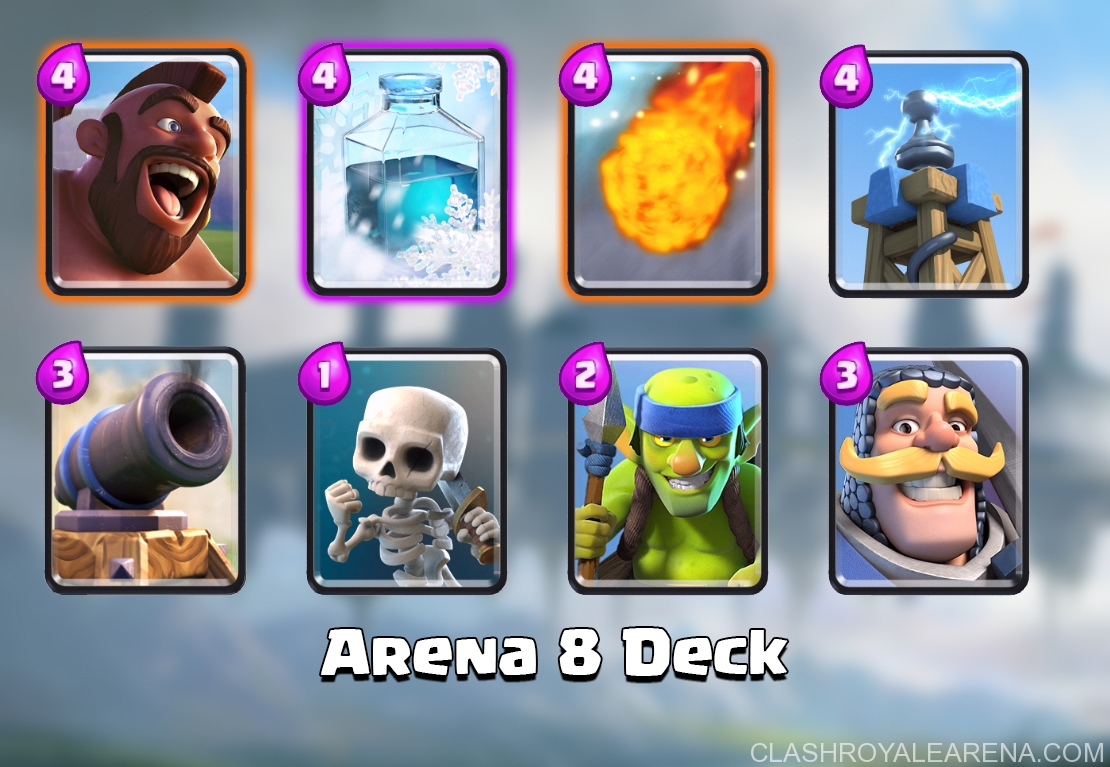 Hog Rider: Hog is one of 2 staples of this awesome Arena 8 Deck. He is the main offensive card of this deck and definitely can’t be replaced. Don’t try to replace him with any card since that will change this deck strategy entirely.

Freeze: Freeze Spell is the other staple of this deck. You can easily use it with every single card in this deck.

Fireball: In this new meta game, it’s crucial to have at least 1 spell damage card in your deck. It’s not required but your deck can’t be viable without it. Rocket and Lighting won’t cut it as they are not cheap splash damage card.

Tesla: Don’t try to replace Tesla with anything else. Without Tesla, this deck would be extremely weak against air troops. It also provides a great defense power for your deck.

Cannon: Because this deck has a very low average Elixir cost (3.1 Elixir), sometimes you have a lot of Elixir on your hand but you are not ready to attack. Thus, Cannon is a nice card to be used in this situation.

Skeletons: This card works very well with the Freeze because they can do a decent amount of damage with just 1 Elixir. Skeletons also can be effectively used to distract the enemies while your defensive buildings are hitting them.

Spear Goblins: Ranged troops with nice damage, they are very useful on both defense and offense. Also, I usually use them to distract the enemy troops just like the Skeletons above. by coupling them with Tesla, you can easily deal with any air attack.

Knight: You can replace him with some other cards but I strongly believe he is working very well with this Arena 8 Deck. All other cards in this deck is very susceptible to splash damage except the Knight. He is also the cheapest one which can counter splash damaging cards. In Legendary Arena, you may face a lot of players using Golem + splash damaging troops (such as Bomber, Princess, Wizard,…). If you use Knight to tank the splash damage then play other small troops to attack either the Golem or the backup troops, it should be good most of the time.

As I said above, this Arena 8 deck is extremely reliant on Freeze. If you want to skyrocket your rank, being precise with Freeze is the most important thing you should care about.

After couples of decent defenses, you will have more Elixir than your opponent. It’s time to start launching a huge push!

Golem Decks: Most of the time, It’s pretty easy to deal with Golem Decks. When the opponent drops either Elixir Collector or Golem, take the advantage and use your Hog + Freze combo. Even If you can’t take down the enemy Tower, you still can deal a ton of damage. On defense, use your Knight to take down supporting troops behind the Golems and use other cards to attack the Golem.

Building Decks: This is definitely the hardest matchup against our deck. You need to use the Fireball a lot and make sure you can damage both buildings and the enemy troops at the same time. On offense, you should use more Elixir than you would to reinforce your push. Most of the time, I end up with a draw against these guys.

P.E.K.K.A Decks: It’s not hard to deal with P.E.K.K.As since you have Spear Goblins and Skeletons in this Arena 8 Deck. Just use the Hog Freeze combo on the other side when your opponent drops his PEKKA.

Prince + Dark Prince: This combo is very popular these days. Make sure your buildings are ready all the time for their attacks. You should drop your Knight to take both charges first then play other troops behind the enemy Prince. Most attackers would drop the Dark Prince first so your buildings can take him down pretty quickly while the Prince getting distracted by your small troops.

X-Bow and Mortar Decks: To deal with these decks, you need to have a decent number of skills in game. Once one of your Towers gets attacked, you should protect it and aim for that side for the rest of the battle. Drop buildings as soon as possible on the side your opponent is targeting. You should be fine as your small troops can easily distract those buildings and any other troop while your defensive buildings are dealing damage. Your Tesla can easily attack the X-Bow/Cannon If they can target your Towers. You also can drop Cannon in front of your Towers to soak damage from the Mortar. 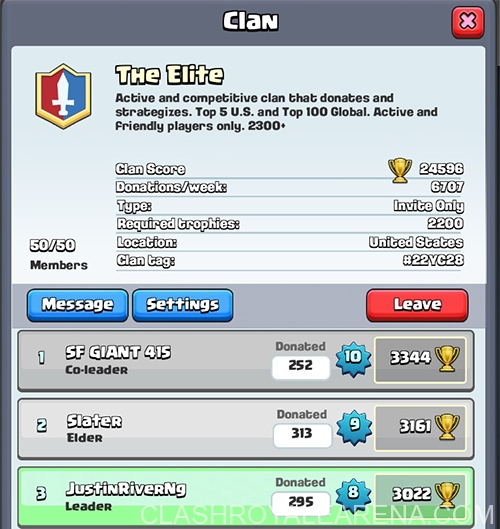 Updating…
Videos of this Arena 8 Deck will be added soon.

Trust me, this Arena 8 deck is very very amazing. I have been using it for a while and everything is just smooth.

Don’t hesitate to comment If you need any help or any suggestion. Also, please share this Arena 8 Deck with your friends If you like it. Thanks for reading guys!