Giant Poison Deck for Arena 8+ – The Legend is back! – Clash Royale Arena

So since the new balance change, we have been facing more and more Giant Poison deck in the Arena.

Giant Poison (or Goison) was dominating in the past, when you couldn’t find anything else but only Goison.

Once again, with a great buff to the Poison, this deck is making a massive comeback in the Arena. 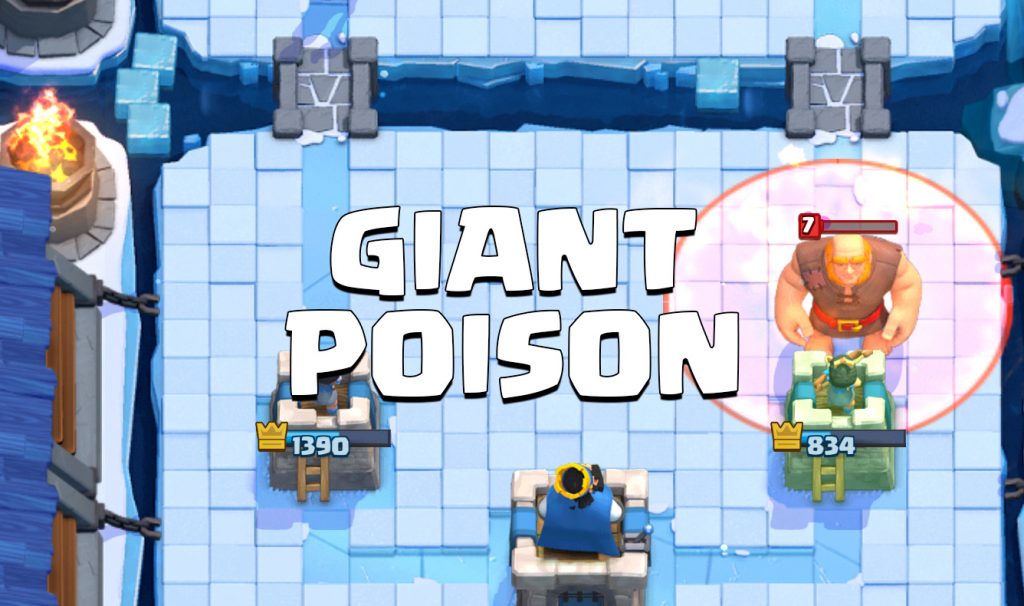 Giant – The Giant is a very popular card in Clash Royale.

At 5 elixir, he boasts a Giant amount of health and if you can get him to a tower, he really packs a punch!

In this deck, you want to use the Giant primarily as a tank, but if you can get him to the tower that’s even a lot better.

You will want to place the Giant behind your King’s tower once you have a decent elixir advantage so that you can build up a good push before he makes it to the bridge.

If you are facing against another Giant deck, you will want to drop your Giant down after your opponent drops his Giant. That will allow you to take down his Giant with your supporting troops, which will switch to supporting your own Giant once your opponent’s Giant is down.

One mistake I see players usually make is not knowing when a push is going to be successful and when it isn’t. Sometimes it is better to let your Giant fall to a successful defense and save your Elixir than it is to keep dropping supporting troops. At the same time, since the supporting cards in the deck are carefully chosen to counter each other’s weaknesses, if you don’t drop the right cards when you can, you may fail to take a tower when you could have.

Only practice will help you gain the skill of knowing when to push and when to fall back.

Poison – The Poison spell is a powerful combo with the Giant because of how common it is to counter a Giant with smaller troops.

The Poison now has a lot better DPS, keeping your Giant alive when he is on the enemy side of the Arena. Good bye Skeleton Army, Minion Horde and any cheap unit.

Since this deck doesn’t use any troops that do splash damage, you will want to use the Poison and Arrows wisely. If I can have my way, I will try to use Poison on the enemy’s side of the field and Arrows on my side of the field, but that isn’t a hard rule so be willing to adapt depending on your opponent’s deck, especially if they have the Minion Horde.

Guards – The Guards are a perfect defender in this deck.

For 3 Elixir, they will give you the advantage against Musketeers, Wizard, Executioner, Prince, Mini P.E.K.K.A etc.

As, they will trade for a Miner, and are great options to use if you know your opponent has an Inferno Tower ready to melt your Giant. If you’re OK with taking some tower damage, you can even use them against a Hog Rider.

Since the Guards attack from a distance, they can also be used to defend against a Valkyrie if placed correctly. The Valkyrie will take 2 swings to kill the first 2 guards, and then have to move closer to take out the last guard with another 2 swings.

These little guys do die in enemy Poison, so make sure you place them strategically so they don’t melt away.

Backed up behind the Giant, she is a great option to use because of how great she is at taking out smaller troops. That being said, you will want to protect her with other supporting troops depending on which cards your opponent has.

By keeping the Musketeer alive, you can make the Giant push work because of her high DPS and range.

Prince – The Prince is a powerful runner! That means that he is good at switching from a strong defense to a strong offense.

In this deck, the Prince is my preferred way to get rid of a Royal Giant and Hog Rider. I’ll match him up with the Poison or Arrows depending on what supporting troops my opponent is using.

When playing other Giant Poison decks, don’t be afraid to drop the Prince in Poison so that you can stop your opponent’s push.

Arrows – Arrows is a strong spell that does a good job at covering the weaknesses of this deck for only 3 Elixir.

Arrows are also a great way to do some additional damage to a tower that is close to falling.

Ice Spirit – Although this little spirit is small, it has a utility that no other troop has, and that is completely freezing troops for 1.5 seconds.

You can use the Ice Spirit on defense against air troops, to reset a troop’s target, or my favorite way: as a counter to a strong defense.

When you have a bunch of troops backed up behind a Giant, it can be very tempting for your opponent to drop a Valkyrie or the Fire Spirits in order to clear all those troops at once.

The Ice Spirit will take out Fire Spirits since it has a longer range, and it will freeze a Valkyrie long enough for your other supporting troops to take her out. Timing this is very important but with some practice, your opponent won’t know how else to counter this powerful push!

Elixir Collector – Elixir Pump has been one of my favorite cards for a long time.

You can invest 6 Elixir for a Pump that will return 8 Elixir at a constant rate so that you are gaining Elixir faster than your opponent. This is a huge advantage if you can protect your Pump (usually with Guards) and if you can survive a push right after you place the Pump down.

I highly recommend reading The Best Elixir Collector Placements so you can put your pump in a place that is less likely to be destroyed by your opponent.

In a pinch, you can also use the Elixir Pump to defend against a Royal Giant or Hog Rider for a few seconds at the end of the match.

Thanks for taking the time to read this guide! I hope that you have found it helpful! 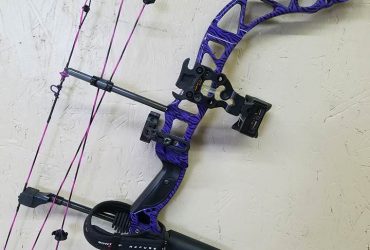 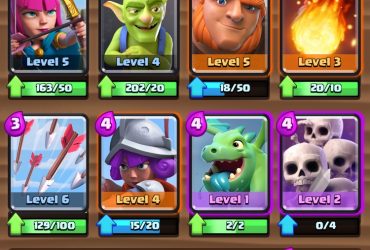 Hello my friends, today I want to show you a stunning Arena 1 Deck from tarjoilija, which successfully helped me push from Arena 1 to Arena 4! Although this is …