This is going to be a Mortar deck that is a great start for any player that wants to play siege in the future. 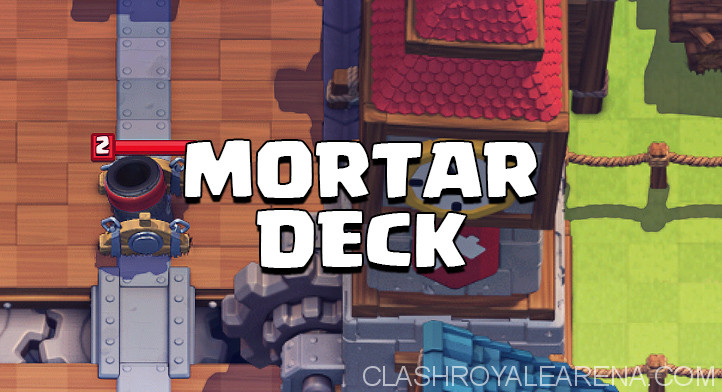 So what is Siege anyway?

Siege is a deck archetype that uses buildings to damage the tower, whether it be Mortar or X-Bow. Even though X-Bow is generally stronger, I feel that Mortar is more “beginner friendly” because:

This deck only uses one epic, the Skeleton Army, which is replaceable with 3 Elixir Minions. Other than that, the deck only uses 2 rares and the rest commons.

Mortar – Your main win condition in this deck, You will want to use the rest of the cards in the deck to have the Mortar reach the tower. 2-3 hits on the tower is considered a successful push. If needed, you can place the Mortar defensively to pull units, and then cycle back to the next Mortar. That way, your previously defending Mortar will be defending your attacking Mortar.

Elixir Collector – Such an important card in this deck. It allows you to build up more Elixir to send back to back Mortars to keep up the pressure on your opponent. You will want to defend as little as possible with this deck, so you will want to have 2 Collectors at all times. Only place these guys when you have at least 9 Elixir.

Archers – Your only defense against air, so use them wisely. You can split them down the middle to pull melee units further. (can u put a hyperlink Will if possible for how Archer split? Thx). If you know your opponent has Graveyard, save your Archers for when they use it.

Fire Spirits – One of my favorite cards in the game. You can use them to take out swarms like Minion horde, barbarians, or even Goblin Barrel. You will mostly use Fire Spirits to defend your Mortar.

Fireball- This card is a bit redundant, but you will use this to clear buildings in your Mortar’s way, as well as slowly chipping down the opponent.

I will mostly cover all of the strategy in the video below, but you can also read my summary.(The audio got screwed up for some of the video because I blocked the mic lol. It’s my first time using audio so give me a break :D)

This is where this deck gets a bit tricky. You will want to choose the most valuable troops to use your Skeleton Army on. Use your Knight to tank the troops and Skeleton Army to deal all of the damage. Use your other troops to clean up the remaining. Your main goal is to counterpush to deal even more damage than you took.

Hog Control/Cycle – Use Skeleton Army to try to get the best value out of taking out your opponent’s hog push. For example, hog rider elite barbarians combo is completely shut down by Skeleton Army. Use the heavy Elixir advantage to launch a counterpush.

From what you’ve all seen, this deck is obviously not the strongest ever; it relies extremely on the Skeleton Army for defense.

This Arena 6 Mortar Deck is more used to build up your fundamentals for much other siege decks.

Siege is a hard archetype to play, so this deck can hopefully make a smoother transition to playing siege.