Hello guys, today I want to share with you a pretty easy-to-use Arena 6 deck which got me to Arena 8 in just a few days! Although I pushed to Arena 8 with level 3 Balloon but I strongly believe that you can do this with just Balloon level 2. This Arena 6 Deck use the Balloon Giant as the main push, which can easily snowball the battle out of control. 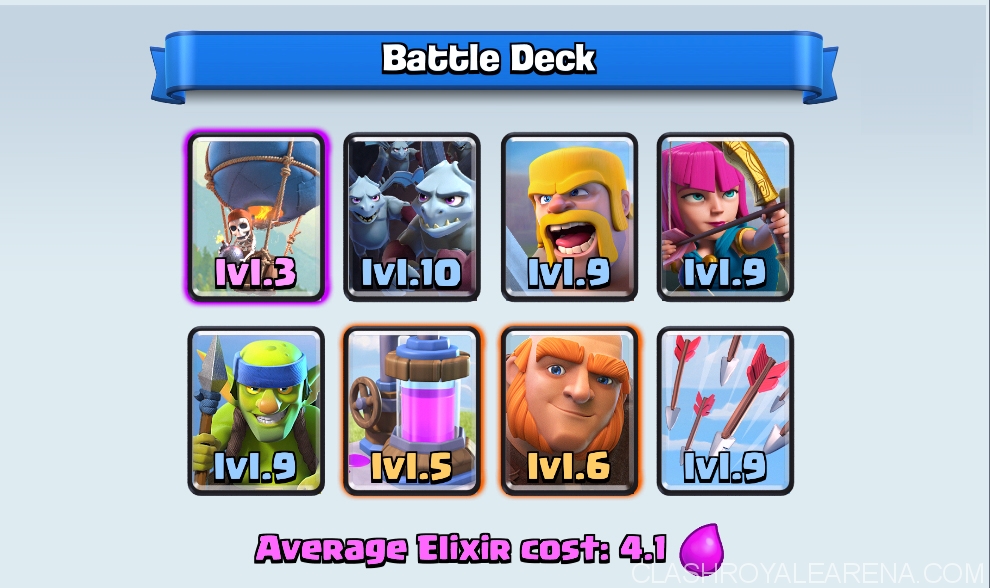 Arena 6 Deck with Balloon and Giant

Giant is the key of your pushes while using this deck. You will want to play him first most of the time whenever you want to push (otherwise, you can place your Archers behind your King’s Tower first). By doing this, you will have enough Elixir to get the decent push squad by the time the Giant has crossed the river. You will want to make sure your Giant will take hit from the opponent’s Tower to protect your Balloon but you will also want to make sure that your Giant and Balloon are close together in order to make your opponent find it harder to kill the Balloon, your main damage dealer. The regular push should be Giant behind King’s Tower => Archers => Balloon at the bridge. During the x2 Elixir time, place your Giant 1 tile in front of your Crown Tower. Normally, If your Giant + Balloon combo can reach the opponent’s Tower with 50% HP Giant, that Tower will fall.

Balloon is the main damage dealer of this deck as stated above. If he can reach the opponent’s Tower, he will deal at least 1400 damage to it. You will need to keep your Balloon as close to your Giant as possible and this needs practice because the Balloon is a bit faster than the Giant (do some friendly battles with your friends before using it in real battles). Moderately good players can easily counter the lone Balloon, that’s why you will always need to play it with your Giant. Try to neither use Balloon to start a push nor play it too early to surprise your opponent, especially if he has anti-air troops. You will also want to place it at the very corner and it will easily bypass buildings in the middle.

Elixir Collector: I usually play my Elixir Collector behind my Towers at the beginning If possible (don’t place it before you hit 10 Elixir otherwise you don’t have enough Elixir do deal with sneaky big push). Always place your Elixir Collector at the side your opponent is not attacking, to minimize the damage it could take. At the x2 Elixir time, you can place it at the middle of your side to protect weakened Towers, this is very important when you has destroyed 1 Tower and want to save the win.

Arrows is a pretty obvious one. Arrows can easily deal with Minions, swarms, Princess and some common counters to your Balloon. I always try to play pre-Arrows, high risk high pay, but If you miss, you can leave a susceptible strong counter push. If the Princess is not really annoying, just let her hit your Crown Towers and use your Spear Goblins to take her down. I have seen lots of players using her to bait out Arrows, that’s why, sometimes Elixir Advantage is not everything.

Minion Horde: This is a quite weak but nice damage card. You will want to use it on defense most of the time as the lone horde rarely can reach the opponent’s Tower. Play Minion Horde to take down Ice Wizard, Musketeers, Witches, Valkyries, Mini P.E.K.K.A,… and lots of other non-splash damage units. Don’t place them on top of Barbarians, especially while dealing with a Royal Giant because you can be hit by Fireball. This card is just very important on defense, for taking out opponent’s air troops. Minion Horde can obliterate Lava Hounds and Balloons If played correctly.

Barbarians: Hands down they are one of the best cards in Clash Royale, right? I play it to defend most of the time due to their so slow movement speed. Barbarians can easily kill a Hog before it reaches the Tower, kill the Royal Giant quickly even after getting Fireball. They can deal tons of damage. If your opponent uses Tank + Splash attack, always try to take down that splash damage unit first otherwise you will find it very hard to play your defensive troops properly (If you don’t know, you can easily kill Wizard, Witch and Sparky with your Barbarians, please take a look at here for more details). In desperate situations, Barbarians can help you take out a Valkyrie but this is not recommend.

Archers are very versatile. They can help you counter numerous of troops in Clash Royale. Place them in the middle of your side and they can easily lure a Valkyrie/Baby Dragon to the opposite lane. If you place them right on top of a lone Wizard, they can take it down too. Use them to back up your push! Archers behind your Giant + Balloon can take out most attempts to stop them. They easily eliminate Goblins, Minions and also do good amount of damage toward Mini P.E.K.K.A.

Spear Goblins: This is definitely another perfect cards in Clash Royale. These adorable green guys can be effectively used on both offense and defense. Spear Goblins are perfect at dealing with full HP Barbarians If played properly in the very center, you can easily make a +3 Elixir trade with them. They can be also used to distract Prince, Giant Skeleton, Mini P.E.K.K.A, P.E.K.K.A and many other melee troops. On offense, I often use them as a replacement for Archers, they can help the Giant Balloon push pretty well. However, they can can be taken out by Zap so you will want to use them wisely. Never start a push with Spear Goblins.

How to snowball with this deck

Snowballing is the key to get easy 3 crown wins while using this deck. I have been getting lots of 3 crown wins in first 2 minutes. However, the x2 Elixir time is the best time when you can dominate the battle. Placing your Giant behind your King’s Tower and starting launching your push means by the time your push crosses the river, you can have another Giant and Balloon ready. This is very hard for your opponent to deal with the second wave. Also, you should counter the opposite lane whenever possible. For example, If your opponent plays an high Elixir troop on the other lane, just push on the opposite and save your Barbarians/Minion Horde to defend.

As stated above, the Giant + Balloon is the prime attack strategy of this deck, especially when protected by Archers and Spear Goblins. However, Barbarians with high HP (after defending) + Balloon would be great too, but it is pretty susceptible to Fireball. If you don’t have Arrows and you see a Minion Horde coming, play your Archers and Goblins!

The 2 best counters to this deck are Spark deck and Ice Wizard + Inferno Tower combo. These counters always can stop your push so it’s better to play defensively for a draw.

Some other tips for you

Okay guys that’s everything I want to share with you today. I hope you have enjoyed this Arena 6 Deck! Don’t hesitate to ask me anything! Good luck my friends! 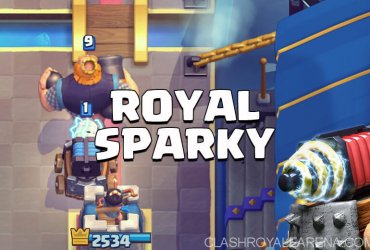 We’ve all tried to make a Royal Sparky deck once in our Clash Royale lives, (if you haven’t, you probably started playing after E-wiz and Goblin Gang were released, because … 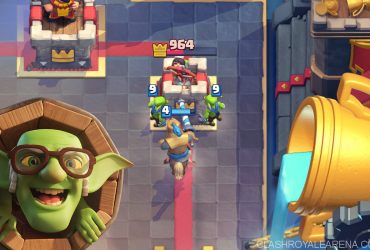 Hi, this is Heiny again! This spinoff from Surgical Goblin’s Prince Bait deck does amazing on ladder. This deck is even more better since the Knight got recently nerfed. Trick your …