This Clash Royale Arena 5 Deck is working very well for me as especially for all free-to-play players since you just need Arena 3 cards and below. This deck was designed by lyingroyale and has been getting tested for weeks. This Deck is perfect for all level 5 players who are looking for a decent deck building in order to push to Arena 5.

This Arena 5 Deck usually ends up with a 1-crown win. In my latest 26 battles, there are 18 wins, 3 draws and 5 losses, also, most opponents were level 6/7 players. 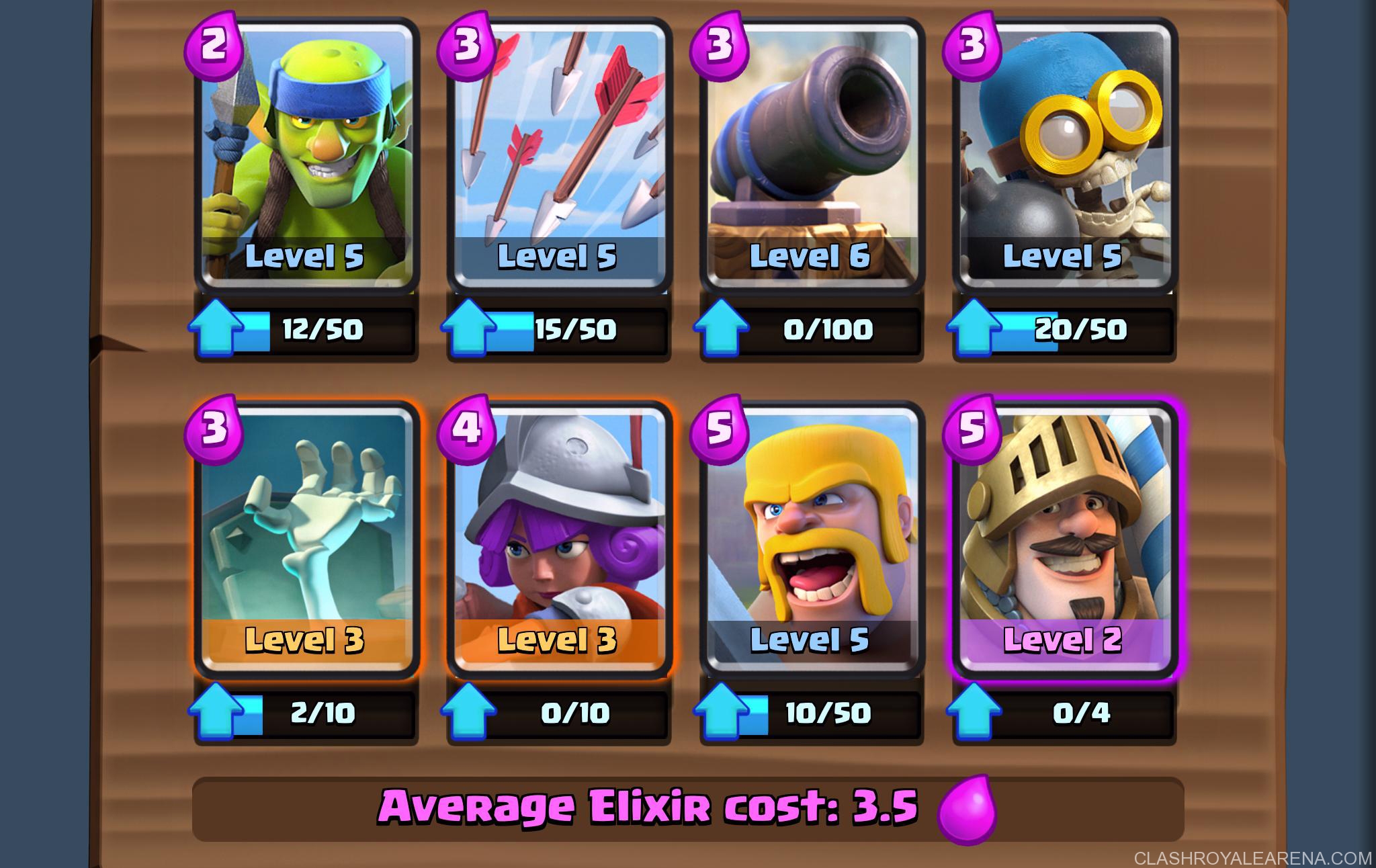 This is a pretty awesome Deck you can use to gain a lot of easy positive Elixir trades. After couples of trades, when you have 5-6 Elixir more than the opponent, you can launch a super attack with your Prince and support troops and your opponent just can’t do anything to stop them.

I am going to explain everything about this deck so please be ready with a lot of texts xD.

Note: You shouldn’t use this Deck If you have low level cards. I recommend using this Deck when you have level 5 Commons, level 3 Rares (The Prince level 1 is working well).

The use of cards

These little guys are very cheap and extremely versatile. You can effectively use them for both defense and offense purpose. Also, because this card costs only 2 Elixirs, you can easily use it to cycle through your deck. On defense, you should place them behind your Towers and other buildings as they don’t have much HP. In offense, you should put tankers in front of them (Barbarians, Prince). They are also very effective at dealing with Balloons when get coupled with the Tombstone. Also, drop them in the middle of your land If the enemy Prince, Mini P.E.K.K.A, Giant, Giant Skeleton,… are coming towards your Towers and you don’t have either Barbarians, Cannon or Tombstone on your hand.

This is definitely one of the most popular cards in Clash Royale. This card is mostly used to counter Minion Horde, Skeleton Army,… You should use this card when you are being attacked, don’t use them when you are pushing as it doesn’t deal much damage when your troops are attacking the enemies. That will be a big waste of 3 Elixir If you use it on offense, unless your opponent drops the low-Hp far away from yours and you want to take them down to help your big push.
If the opponent throw the Goblin Barrel towards your Tower, just simply place Arrows onto your Tower. Don’t worry, it takes a delay to load and those Goblins will be taken out immediately.
Sometimes, when the opponent attacks you with the Minion Horde and you don’t want to use the Arrows (If the opponent has the Goblin Barrel for example), you can place the Tomstone in the middle and let your Towers deal with those Minions.

Cannon
Hut Decks are very popular in Arena 4 and 5. You don’t like them much? Don’t worry, the Cannon can help you deal with them with ease. After Arrows a group of troops with the help of the Cannon, you can push the other lane with Barbarians or Prince (Ideally you want to do this after taking out their Minions). You can use Tombstone instead of Cannon when the opponent drops Prince, Hog Rider or Balloon and you can save up to 3 Elixir.

Bomber/Baby Dragon
He can deal splash damage and help you deal with Huts, Barbarians and Witches. This is one of the best cards to deal with Barbarians in my opinion, he can also 1 hit kill Goblins and Skeletons. He is also extremely helpful when getting coupled with your Prince, especially when you know that the opponent is going to use Barbarians/Skeleton Army. You can use him to kill Archers but it’s better to let your Tower, Cannon or Musketeer deal with them when they come lonely.
Sometimes, I use the Bomber to deal with Goblin Barrel. This works perfectly.
Although his damage is great to deal with a lot of troops, you always should have at least 1 tanker or 1 building to protect him, just like any other ranged troop.
It’s better to replace Bomber with Baby Dragon If you have one. The author of this deck (lyingroyale) didn’t have Baby Dragon when he made this Arena 5 Deck so I don’t mention it here.

Tombstone
This annoying skeleton-spawning hut is extremely effective at countering Prince or Hog Rider. If you can play it correctly, you always can gain at least 1-2 Elixir advantage with this card and without taking a single damage to your tower. I usually can get 2 Elixir advantage when I use this card to stop the Prince. Dealing with Hogs is a bit harder, you should use Spear Goblins or even Barbarians to kill Hog Rider faster and prevent it from hitting your tower. After that, you can launch a decent counter attack since your troops are full HP.
If the opponent use Prince or Hog Rider when you don’t have Tombstone, use Cannon + Spear Goblins (or Barbarians) to deal with them.
Tombstone is the core card at dealing with lots of troops such as Giant, Balloon, Giant Skeleton, Knight,.. That’s why I really like this card.
The Tombstone is very weak against Bomber, Witch, Baby Dragon, Mustketeer,…

Musketeer
Musketeer is an effective damage dealer. She can deals a lot of damage to anything when she has a tanker in front of. You can use her to counter Balloon, Baby Dragon, Giant,… and lots of others. She can 1-shot Goblins, Skeletons (can’t 1 shot Archers and Minions). If you start the battle without Cannon or Spear Goblin, you can deploy her behind your King’s Tower and couple her with Barbarian/Prince/Spear Goblins/Bomber (depending on the enemy troops) later for a powerful attack. She is the core in pushing and will be used when you have elixir advantage. You should act accordingly and choose the best troop to use with her depending on the enemy troops.
In offense, she is extremely useful to deal with Goblins/Bomber/… but she is too slow to deal with Minions or Archers (she can’t protect tankers). It’s better to use Baby Dragon in stead of Bomber If you have one.
If you opponent has Fireball, wait till he uses it on other troops then you can push with Barbarians and Musketeer.

Barbarians (5 elixir) –
They are solid tankers which can also deal a lot of damage but has a bit slow movement speed. On defense, Barbarians are extremely useful at killing off Goblins, Musketeer, Skeletons, Prince, Knight, Archers, Mini PEKKA, Giant, PEKKA, Giant Skeleton, Hog Rider,… (except Bomber, Valkyrie, Bomb Tower, Wizard, Baby Dragon,…). On offense, you may want to use them when the opponent uses small troops like Skeletons/Goblins (you shouldn’t use the Prince in this case anyway). You may also want to couple this card with Bomber as it can quickly clear out all low HP troops. If the opponent has Bomber/Baby Dragon/Wizard, you should put a Prince or a Musketeer to protect them.
You should use both Barbarians and Prince If there is non-splash defensive building since Barbarian movement speed is not good and it won’t be enough to do a decent attack. If there is Bomb Tower, Prince is preferred and you can use Barbarians after it is down.
You should also care about the Fireball as it deals a lot of damage to your Barbarians.

Prince (5 elixir) –
Prince has the biggest role in this play. He is definitely irreplaceable. Most of the time, I can get the crowns with the help of this handsome prince. This card is mostly used on offense for taking purpose. He deals lots of damage or even takes down a Tower with ease when your opponent uses the counters on something else.
When charging, he can one-shot Musketeer, Wizard,.. He can one-shot most small troops of course but that takes a lot of time, then you should use a Bomber or Musketeer.
I occasionally use him for defensive purposes. Most of the time, on defense, I use him to kill off a With which is being helped by Bomber/Musketeer/Wizard/… because he has a decent HP, doesn’t get affected by splash damage. If the Witch is protected by Giant, you should take down the Giant first with Barbarians/Cannon/Tombstone. If you successfully defend the push, deploy either Prince/Barbarians for a quick attack. The opponent will don’t have enough Elixir to defend for sure.
It’s not smart to use him when the opponent has Goblins/Barbarians/Minions/Skeletons/… on his hand.

Basically, you may want to counter everything your opponent players to gain the Elixir advantage. When you have a decent Elixir, you can launch an attack or you can start building a slow push from the beginning in case your opponent doesn’t commit at starting.

When the game starts, If the opponent doesn’t place any card till 10 Elixir, you should put a Cannon/Tesla in the middle, or you can drop the Spear Goblins on the bridge, they can deal some damage and you also can see how your opponent reacts to it, then start countering hits plays. Try to remember your opponent’s cards and the ways he counters your attack in order to calibrate the next push. If he uses Skeleton Army to deal with your Prince, next time, use a Bomber to protect your Prince. If he uses Spear Goblins or building cards to deal with your Prince, you can use either Musketeer or Barbarians to support him in the next Push. It’s all up to you, play the game wisely and carefully.

Okay so that’s all about this outstanding Arena 5 Deck. It’s pretty long, right? It took me a few hours to finish this post to that’s great If you can share this with your friends as that will help this blog a lot! Also, remember, do not hesitate to leave me a message in the comment section below If you need any help!