This Giant Snowball Deck is suitable for any Arena from (4-8) and requires no Legendary or Epics. I’ve been using this deck since Arena 1, interchanging cards to fit the meta of the game. The idea this deck is to slowly build up troops from the back of the map, giving yourself a 15+ Elixir push. This deck offers a very aggressive push as well as good counters to most of the meta cards. This deck is very versatile and each defense can be easily converted to a huge counter attack. 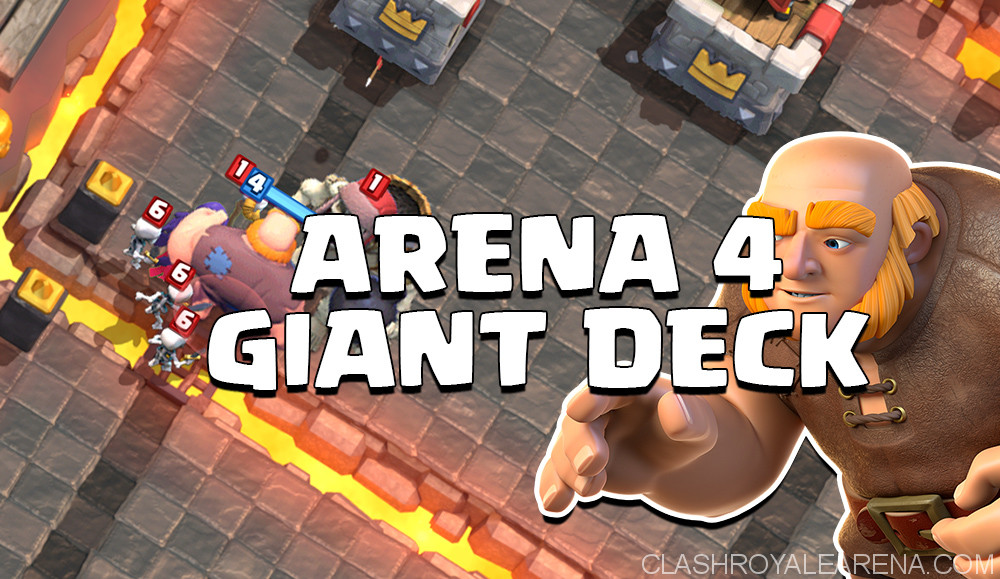 Minion – The Minion is an excellent card for 3 Elixir, very flexible and offers a great damage per second. The Minions is often underrated as it is often overlooked and not worth arrowing. Minions are a great counter against Valkyries, Mini P.E.K.K.A, Sparky, Princes and just about every other ground troops who ignore air units. In my pushes, I often follow the Minions up right after I place the Giant. The strategy is pretty self-explanatory and if the minions aren’t dealt with, it will do some serious damage.

Zap – As for your spell card in the deck, Zap offers a great value for the price of 2 Elixir. From being able to allow your troops half a second more to damage a tower to being able to reset cards such as the Sparky and Inferno tower (One of the weakness for Giant). Furthermore, the Zap also offers an excellent trade against cards such as the Minion Horde, Minions and allowing your tower to finish them off.

Musketeer – The Musketeer has a great range and deals a good amount of damage. It’s very effective when it comes to dealing with Air units as well as being a great support to the Giant. The Musketeer is most effective when trying to siege the second tower as it can be placed in the middle of the enemy’s map right behind the giant. With her range reaching the tower fast and dealing hundreds of damage at the same time. I usually start off the game with the Musketeer if it’s in my hand since it’s pretty slow and has a good range to defend or easily cycle to either the Valkyrie/Giant for a push.

Valkyrie – My favorite card in this deck, the Valkyrie is very versatile. From being able to wipe out everything from the middle of an enemy horde to being the second tank to this deck. The Valkyrie can easily stop an enemy push, very effective against Wizards, Witches, Musketeers, Ice Wizards, and every other supporting offensive card as you can imagine. I often save my Valkyrie for defense as it is super effective unless I have to counter a Building card. In which case, I will use it as a secondary tank to mess up the card cycle. The Valkyrie can also be used as a sweeper, paving the way for the giant against Barbarians.

Giant – The Giant, one of the most popular cards being used in the current meta right now. For 5 Elixir, the Giant offers a great amount of health and deals a good amount of damage against the crown towers. The Giant is the main card for pushing in this deck and it is usually followed by high DPS supporting cards from behind. The Giant can be placed at the back of the King Tower, giving you plenty of time to build up the elixir you need for the push. The supporting cards will vary based on what cards you encounter but I usually pair the giant with the minion along with the bomber. or Musketeer & Minion. The list of combos goes on but it’s usually best to bring a card that offers splash and a high DPS. This strategy is most effective during the 2x Elixir as it gives you the opportunity to stack up a lot of supporting cards. At times you’ll be able to find yourself stacking 2 of the same cards giving the name the “Snowball” deck. Once it reaches this stage, it will be very hard for the opponent to recover and a good opportunity to go for the 3 crowns.

Inferno Tower – The Inferno tower is a great defense structure that helps significantly with this combination. It’s a great counter to popular cards such as the Giant, Royal Giant, P.E.K.K.A, Golem, Giant Skeleton. When defending the Royal G, things can get a bit tricky as you have to wait for the giant to get in range of the tower before you place it. Timing is key on this one. The Inferno has a good amount of Hp, allowing it to clean up the remaining supporting cards followed behind the giant. Value!


The Giant is very vulnerable to Mini P.E.K.K.A’s as it’s damage is deadly. It is recommended to counter this with Minions, killing the P.E.K.K.A asap. The Ice Wizards also makes the push quite difficult as it slows everything down, so it would be wise to space out the supporting troops according to the giant so they can take out the Ice Wizard, without being in its effect. Another weakness would be a Fireball, but as long as it doesn’t kill your supporting troops the push is fine.


When besieging the second tower, try to build up the supporting troops from the back of the King Tower without the Giant. When your troops reach the bridge, place the giant in the middle of the map, soaking damage from both the Crown Towers and splitting up the enemy’s defensive force. Pinsir Attack!

My username is Jien ~ hope this deck brings you as much success as it has for me. And keep on clashing!