Hell guys I am Aristile. With all the spawner decks, Giant/Valk push decks, and little doodlet decks that hang out in Arena 4, it took me quite awhile to finally pull enough Epics to be able to set up a deck that does well, and one that DOESN’T rely on waiting forever for my opponent to make their first move. 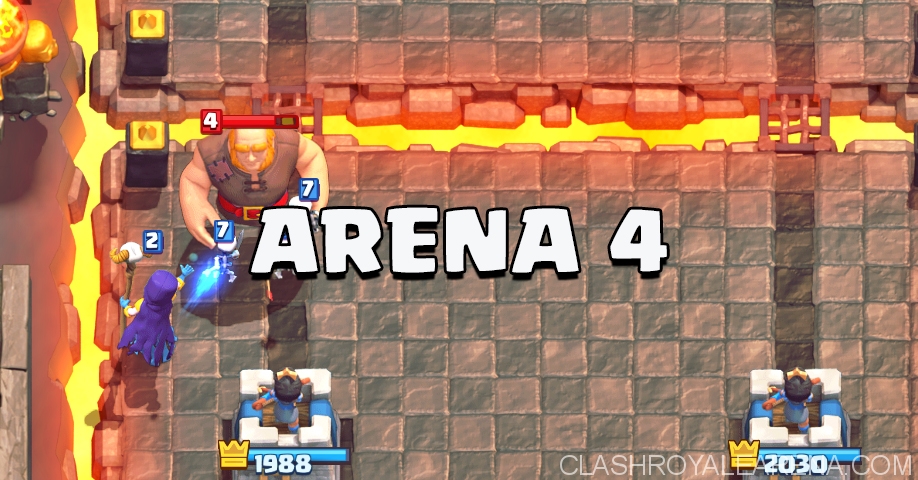 (Note: If the opponent makes a move before you hit 10 Elixir, it is always better to drop whatever offensive strat you had and to counterplay for positive Elixir trades.) The idea of this deck was to take advantage of the +1 to +3 elixir you can potentially get for making the first move, while still having a solid counter to whatever they play.

Here’s a breakdown of each cards role

Giant Skeleton / Giant – Giant Skelly exists as your biggest tank or your best defensive option against doodlet Decks. At the start of a match, if he’s in your opening hand, pick a lane and drop him behind your King tower the second your elixir hits 10. At this arena level, people often don’t react right away, the can net you a FREE 1 to 3 Elixir! Take advantage of that and get a push that will cost them to counter! The difference between the regular Giant and Giant Skeleton is quite large though. The regular giant is NOT going to help you against doodlet decks at all, but is a better for pushing a lane.

Baby Dragon / Valkyrie – This is your second tank option. If you do not have a Giant Skeleton in your opening hand, place this card behind your king tower as your opening play. More often though, you’ll be playing them to clean up doodlet, and Spawner decks. I have found the dragon to be better in every way than the Valkyrie, but Valkyrie is not far behind. The biggest difference is that dragon is an air unit, and can deal with some things the Valkyrie can’t (like minion horde), but it is very weak to musketeer (which is super common in this arena) and it does die slightly faster than the Valkyrie due to his lower hitpoints.

Witch – This is the only card I’d call absolutely irreplaceable in the deck. In the event you do not have a Giant Skeleton / Giant or Baby Dragon / Valkyrie in your opening hand you may place the witch behind your king tower as your first drop; however if you do this, you need to be able to follow it up with a tank in front of it before it hits lane or runs into trouble! The Witch has turned out to be one of the best single card counters to everything in this Arena. Last week’s buff to her damage lets her wreck doodlet decks running Goblins, Spear Goblins, and Minions. She can deal with a Spawner lane almost by herself if placed correctly. She takes care of any aggressive units such as Mini P.E.K.K.As, Princes, Hog Riders, and Balloons very well (especially if supported by a Musketeer). She can take out any tank units (except for Valk and Baby Dragon) very quickly. She has just been an awesome card that is play testing great in this arena! As your primary tool, use her to push a lane behind one of your two tanks, and if possible support her with a Musketeer to cover all of your bases in a push.

Musketeer – A staple at this arena level. She decimates tanks, is useful against Spawner Decks, deals with Baby Dragon and Balloon better than any unit we have access to atm, and reinforces our push very well! IMO every deck that is in this arena should run her.

Mini P.E.K.K.A. – Much better than his big brother. The versatility of this card is great. You can drop him alone into a neglected lane to do half of a crown tower’s hp in damage, or use him to take care of big units like Giants, preoccupied Musketeers, or an uncharged Prince. This is the most replaceable card in the deck if you want to add some of your personal flavor to this deck.

Fireball – Holy crap fireball has been so much better than arrows in this deck. Our weakest matchup (of the most common decks in this arena) is Spawner Decks, and they’re EVERYWHERE in this arena. We don’t need Arrows to deal with doodlets because we already have, 2 Splash Cards and Giant Skeleton. If they drop their spawners behind their tower (and they always will). Be sure to hit the wave of barbarians coming through the Bảbarians hut along with the crown tower, the barb hut itself, and the Spear Goblins Hut. Then watch the spawner users angry emote at you as soon as this happens, it’s great! Alternatively it works great for countering regular Barbarians to put them in 2 shot range of your Witch, or you can use it as emergency doodlet cleanup if your splashers are preoccupied.

Spear Goblins – Cheap and elixir efficient, they deal with any air target not looking at them very well, and are excellent to reinforce your push if your opponent wastes their aoe to hurt the Skeletons spawned by your Witch. They are also great for stopping Mini P.E.K.K.As and Princes once they’re on your side of the board.

Skeletons – A one elixir counter to Princes, Giants, and Mini P.E.K.K.A? Yes please! They also work to distract units away from your tower! They’re a bit tricky to get used to if you’ve never used them before, but if you learn to love the Skeletons, they WILL win you games by themselves.

My Current win rate is around 66% with this deck, and I’m not particularly good at this game, but after a day of playing it, I’m almost in spell factory! I hope some of you enjoy trying this deck out! Let me know what you think, and any improvements or changes you would make! 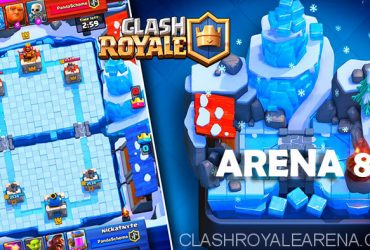 Tired of seeing over leveled cards in your Arena? Can’t spare the cash to buy any of those epics or legendaries in the shop? What about a deck that requires … 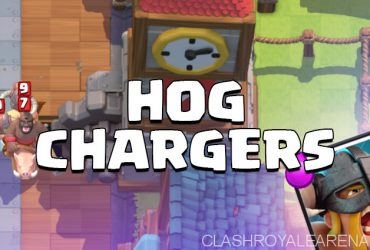 Heeeey what’s up guys! Zigge here with another deck, the Hog Rider Chargers deck for Arena 8+ players! We have our Hog Rider, Elite Barbarians, Lumberjack or Mini P.E.K.K.A which …