Hello my friends, today I am going to introduce with you an Arena 4 deck – the Prince Squad. This deck was shared by VF from EL TORROZ (Thank you very much mate!). I did a small test with this deck yesterday on my level 4 account and I successfully pushed from Arena 4 to Arena 5 with 8 consecutive victories. 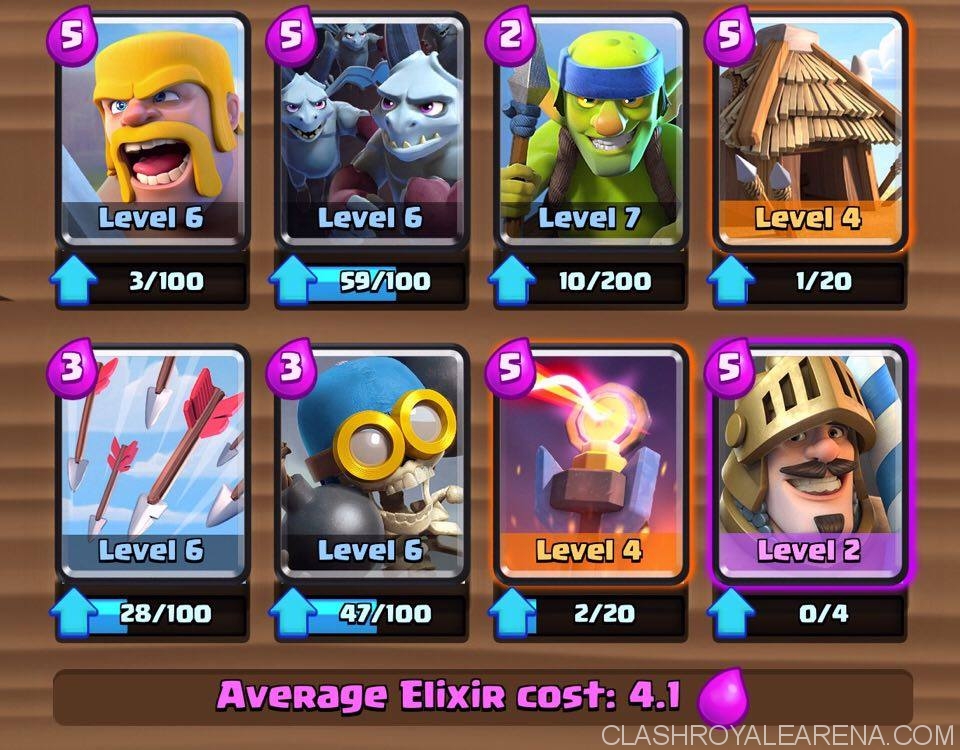 This Deck is rather defensive. Its main goal is to use disruptive cards that allow to generate Elixir advantages while applying pressure to a lane. Many victories will result into 1-0 and you frankly don’t need more crowns; 1-0 is as much a victory as 3-0 is.

Barbarian // 5 Elixir / Ideal Level range: 6~8
This card is awesome. Barbarians are jack-of-all-trades in this game. They can be used defensively to take on about all the troops with some help, as well as offensively as sponges to take hits while your ranged goblins do most of the damage.

Minion Horde // 5 Elixir / Ideal Level range: 6~8
Summons not 3, but 6 minions, for only 5 Elixir. A total bargain, capable to take on powerful melee troops like no other card and walk out undamaged. They can also destroy a distracted Baby Dragon and take on the Witch with relative ease. Awesome on offense if your opponent don’t outright one-shot them with Arrows. At Level 8 they do not die from Level 6 Arrows, which means they can prove surprisingly bulky for their role.

Spear Goblin // 2 Elixir / Ideal Level range: 7~8
This is the cheapest valuable card of the game. It does everything. It can take on the Prince, the Giant Skeleton, the Balloon, the Musketeer, you name it. It may not kill everyone but it is more than a good distraction, that buys time for your towers and the Inferno Tower to finish off enemies. OFfensively an awesome card behind Barbarians or even Minion Horde and Prince.

Goblin Hut // 5 Elixir / Ideal Level range: 4 minimum
Continually summons Spear Goblins. It can apply pressure in a lane by spawning the goblins that deal little damage, that builds up slowly, against enemy tower. Place it behind either crown tower that isn’t the king, on the leftmost / rightmost corner, or closest to king’s tower. Make sure you always have an active Hut. Having two is best as well.

Arrows // 3 Elixir / Ideal Level range: 5~6
How awesome! This is literally the best card of the whole game. Kills all weakened troops. Kills Archers, Spear Goblins, Goblins, Minions, Minion Horde, Skeleton, Tombstone, Skeleton Army and any building that has reached little time in its lifespan. Can devastate a squishy assault. Gets rid of the silly cards that may distract your Prince, Barbarians and Minion Horde. Cheap and awesome!

Bomber // 3 Elixir / Ideal Level range: 6~8
This is a one-man army killer. He can take on Barbarians, Witch, Archers, Musketeer and Goblins of all kind, alone. He’s an awesome backup troop to eliminate pesky squishies and work like the Arrows, but as a troop. However he doesn’t target Minions which is why you need the Arrows. You can replace him with Freeze if you have that.

Prince // 5 Elixir / Ideal Level range: 1~2
Here comes the most powerful card of Clash Royale. His damage output is stupid. Incredible movement speed paired with ridiculous damage output makes this dude the best offensive card of the game. Bomber can follow him to help him take on the likes of Skeleton Army and Spear Goblins, while Arrows will eliminate Minion Horde that will nevertheless eat him alive. When you can tell your opponent depletes their Elixir, your Deck has most of the tools to sabotage any assault, and when you have generated this elixir advantage, when you know your opponent has no elixir to stop the Prince, send him. You can also use him on defense to kill bulky troops with ease.

Inferno Tower // 5 Elixir / Ideal Level range: 4 minimum
This is the most underrated card I’ve seen so far. Come on people it exists. It is Inferno Tower. One hell of a building to take down without Minion Horde / Freeze Hog / Freeze Balloon. That’s right. Your opponents will likely waste insane amounts of elixir to take it down. Play as if you had to protect it. If they send Barbarians, get that Bomber out. If they go for PEKKA, distract him with Bomber and Spear Goblin. If their pick is Baby Dragon, get him worked up with Spear Goblins. Watch as the red laser will deplete even the mighty PEKKA’s health in seconds, like no other card can do. Play it right, expect no more than what this card can do, and it will generate insane amounts of Elixir Advantage.

Okay thank you very much for reading guys! I hope you can easily push to Arena 5 with this Arena 4 Deck – The Prince Squad. You rock!