Hey, Pencil here, Today I want to share this deck which helped me successfully push from Arena 4 to Arena 6. I have won 5-10 games in a row with it. It has got me some amazing victories. Sitting at a 3.6 elixir cost, this deck has the offensive and defensive power needed. It requires only 1 Epic, 2 Rares and everything else is Common. 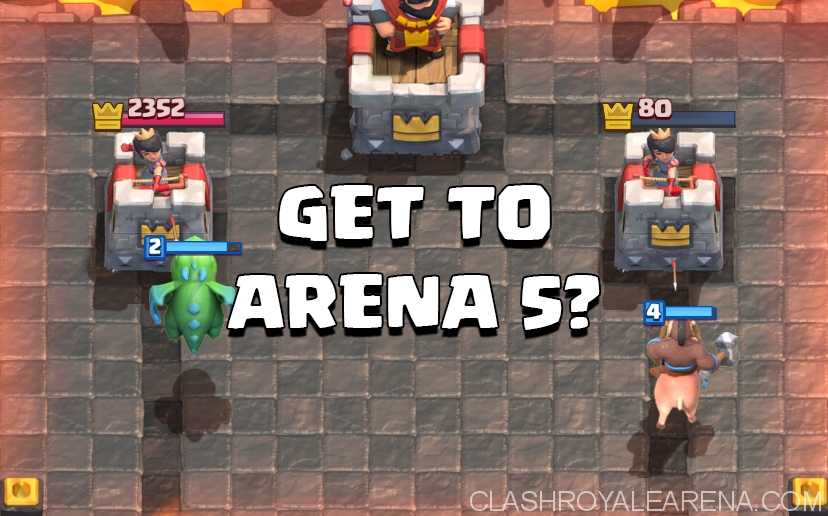 Let’s get started, here is the deck:

Hog Rider (Ideal level – 4+ / Replacement – Prince): One of the best cards in game at this time in my opinion. It only targets buildings. Being extremely fast and powerful, it is very popular and highly used in TV Royale. A highly offensive card, it can deal major damage to an enemy tower if left unchecked. With a tank in front of it, it can deal serious damage or destroy an enemy tower. Baby Dragon and Barbarians can definitely support the Hog Rider with their health. The tank will soak up all the damage while the Hog Rider lays waste to the tower. It does its job well.

Goblin Hut (Ideal level – 4+ / Replacement – None)
Spawning 1 Spear Goblin every second, it is a card that can deal slow periodic damage. Spear Goblins can do some very good chip damage. Its Spear Goblins can distract P.E.K.K.A, Prince and much more. If the enemy sends a tank towards your way, and it’s ignoring your tower, a Goblin Horde will be spawned during the time it takes for the tank to die and you can counter with your own tank, making it an very good counter.It can be used as a desperate, expensive distraction as well. It can support a push very well.

Spear Goblins ( Ideal level – 7+ / Replacement – Goblins ( not recommended )
An useful card that is used in almost every deck. Spear Goblins can target both air and ground troops. I choose them over normal Goblins as the they can attack air troops. With only 2 elixir cost, this card can be a good distraction and a damage dealer. If you need a counter quickly and you’re almost out of elixir, this is the card for you. It can distract P.E.K.K.A, Prince and more very well. It can support anything very well.

Arrows ( Ideal level – 7+ / Replacement – Zap )
A card that can lay waste to a Horde or Army. For 3 Elixir, it can quickly take out 1-5 Elixir cards. It can do some serious damage to other cards as well. Enemy sending a Minion Horde, Skeleton Army, Goblin Barrel, etc your way? A quick Arrow play can absolutely annihilate the push.

Baby Dragon ( Ideal level – 2+ / Replacement – None)
An amazing card. It’s an air troop that can target air and ground units and does area damage… wow. Its low Elixir cost can definitely help your shuffle through your cards quicker. It’s a good tank that can be paired up with anything. It can do a lot of damage, combined with a Hog Rider. Another way to destroy hordes and armies if you don’t have Arrows yet.

Barbarians ( Ideal level – 7+ / Replacement – None )
It’s a very versatile ground horde that can stop most pushes and start yours. Sitting at a 5 elixir cost, this card is only played when you have a good push ready or when you need to counter a good push. Area damage absolutely decimates most barbarian hordes. However, it’s a very good tank, that can support a push extremely well. if left unchecked, a group of barbarians can take down a tower quickly.

Cannon ( Ideal level – 7+ / Replacement – Bomb Tower, Tesla ( not recommended )
A must in this deck. Sitting at a 3 elixir cost, it’s a very good and cheap distraction. Got a Hog Rider coming your way? No problem, just place a Cannon and be on your way. If they send any troops that only target buildings, this card can seriously destroy the troop. This card works well against tanks too. It can counter spawner decks well. Its rate of fire is very quick, allowing it to quickly take down troops. The downside of this card is that it can only target ground troops.

Archers ( Ideal level – 7+ / Replacement – None)
These pink hair girls can seriously pack a punch. They can do very good chip damage. The are the Baby Dragon’s worst nightmare (read more about this at here). Combined with a tank, they can do huge damage to an enemy tower. They are also a good cheap distraction. Archers can’t be killed by Arrows.

Early Game -> Mid Game: I prefer to go on the offensive with this deck. I will usually start up with a Hog Rider/Baby Dragon or Hog Rider/Spear Goblin. If I don’t have those cards, I will usually wait until my opponent attacks and counter his plays then do a counter-push. You have to be careful to not spend most of your Elixir, even if the deck has a low Elixir cost, one wrong move and you’re gone. By the end of mid game, hopefully you would have done half-full damage to their tower.

Late Game ( X2 Elixir ): With X2 Elixir, you can send a lot more pushes, but you still have to make sure you have enough Elixir to defend your tower. If you have done damage, just keep on doing Hog Rider combos. Make sure to counter anything they place down to stop your push. If you haven’t done a lot of damage by the end of late game, you might as well just defend unless your enemy makes a stupid mistake.

Hopefully you guys have found this deck helpful. Don’t hesitate to ask me any question guys! You rock! 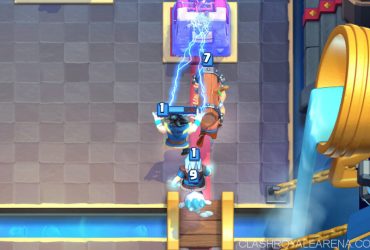 Hello everyone! My name is Herro and this is my first article on CRA. So recently bridge spam has been very popular and powerful in the meta. I’ve always wanted … 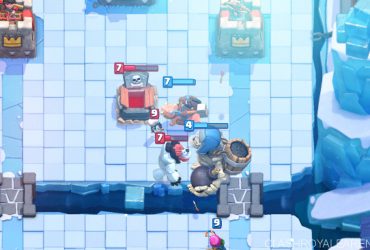 Hello everyone Savitar here again with a Giant Skeleton Hog Rider Deck with wait for it no legendary cards. Now until now I had never liked the Hog Rider. I’ve …