Hello guys, today I am very excited to give you this awesome new Arena 3 Deck which has been working extremely well and been helping me pushed my alternative account from Arena 3 to 200+ trophies (Arena 7). This Arena 3 Deck was shares by Sarvesh. It is for all free to play players since it mostly uses Common and Rare Cards. This is a beatdown deck that revolves around Giant Push and gaining Elixir Advantage. 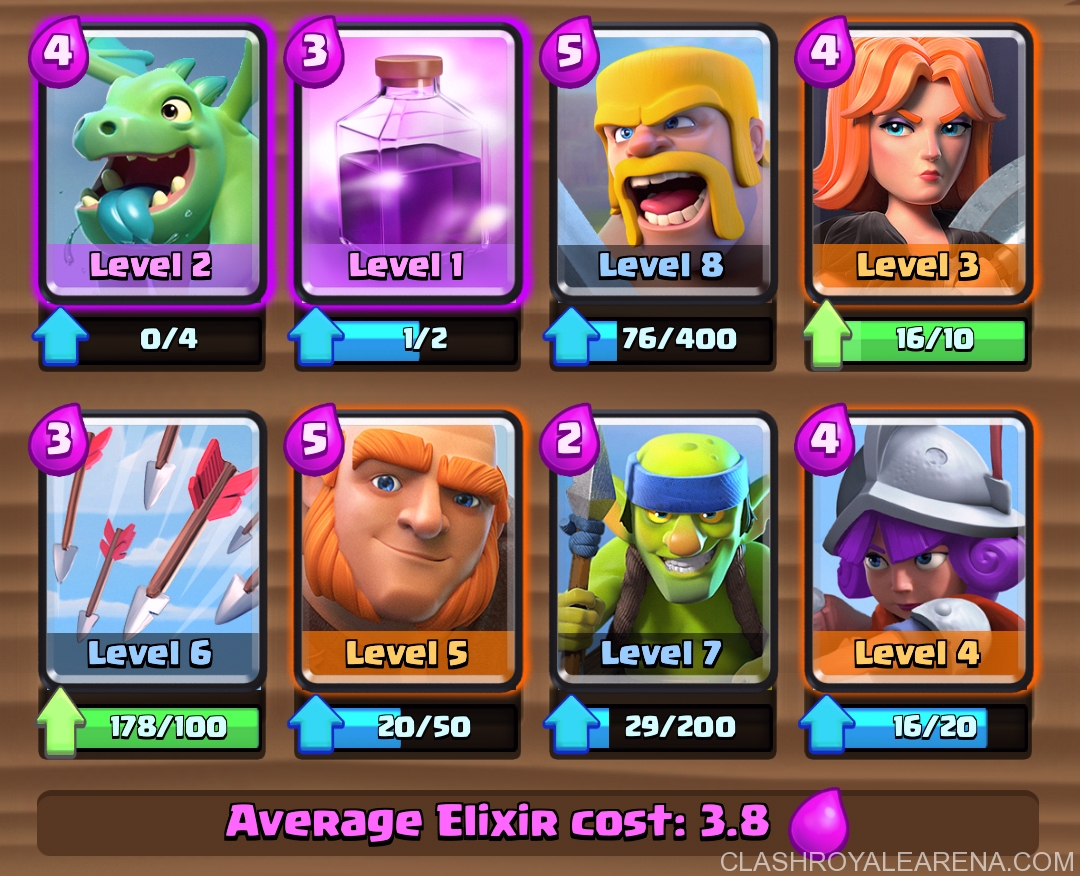 The use of cards

Giant: Obviously Giant is the only main tanker of this Deck. If you don’t have enough Elixir to launch a decent push with Giant, drop him behind your King’s Tower so by the time it reaches the bridge, you can have 2-3 back up cards behind him. He is mostly used on offense but sometimes he is also pretty useful on defense for soaking damage.

Musketeer: She is one of the main damage dealer in this Deck. With her solid damage, you can deal a ton of damage to the opponent’s tower If she has a nice protection. She also can 1 shot Goblin, Spear Goblin, Minion and overrange Cannon. I also love using her to counter Baby Dragon for a nice trade. You always want to play her later. Using her a bit later is always better than place her too close to your Giant (your opponent will use Barbarians/Goblins/Swarms and get rid of her with ease).

Arrows: Needless to say, Arrows is one of the most useful cards in Clash Royale which can help you easily deal with any sneak attack of Goblin Barrel, Minion Horde,… Most of the time I don’t use Arrows on offense as my troops can kill the enemy troops before Arrow reach. It would be a big waste unless your opponent drop his swarm behind the tower and far from yours. Also, sometimes, your opponent wants to bait your Arrows out by using Goblin Horde.

Valkyrie: What? For real??? She is useless!
Yea, she may be useless in other Decks but not this one as she is the main unit in this Deck that gives you a lot of Elixir Advantage. For example, Giant + Musketeer + Wizard is a popular push in Clash Royale. If your opponent uses this combo, simply drop your Valkyries in Wizard + Musketeer and Barbarians on Giant. That’s 9 Elixir for 14 Elixir.
If you are in Arena 4 or below, she is very helpful in these Arenas since most players use Giant push deck here. Simply drop her on the enemy support back line as soon as they cross the river and you will be fine.
On offense, you may want to use Valkyrie with your Giant to deal with any Skeleton Army, Barbarians, Goblins,…

Spear Goblins: This is a very versatile card that can be effectively used on both offense and defense for positive Elixir trades. On offense, I usually drop them on my Musketeer immediately once she crosses the river to protect her from Barbarians, Goblins,… Basically Spear Goblins are the handymen of this deck. If the opponent use Mini PEKKA, stall her with Spear Goblins. If the opponent use P.E.K.K.A, use them to tank 3 hits and give your Barbarians enough time to kill her.

Barbarians: This is a solid defensive card which can be effectively used in all Decks. Just make sure your Barbarians are strong enough so your opponent can’t easily 1 hit them with Fireball. As mentioned before, if your opponent launches a Giant push with Wizard and Musketeer, use your Valkyrie on backup troops first then Barbarians on Giant. Barbarians will tear through any tanker If they have enough protection.
Although they can deal a lot of damage to Tower but are pretty easy to be countered. Don’t use them on offense unless you have a lot of more Elixir than the opponent and are always ready to deal with his counters.

Rage: This case will usually happen when you use this Deck: After pushing, only you Musketeer and Spear Goblins survive and they are hitting the Tower. You have only 3 Elixir and Rage is on your hand. Would you use Rage? Don’t! You just can deal a bit more of damage with Rage and it’s such a waste. Also, using Rage badly will show commitment and invite counter play.
Normally I would use Rage when having x2 Elixir, when you can drop lots of troops down and still have enough Elixir to spend on Rage.
If you spend 15 Elixir on a big push and your opponent uses 15 Elixir to depend, it’s not really good to use Rage to take a upper hand because of the positioning advantage. Your opponent could drop his troops anywhere and could take down your backup troops first.

Baby Dragon: A nice card which can be effectively used in most Decks. If you have enough Elixir to launch a big push with Baby Dragon, Valkyrie and Giant, even If your Giant gets taken down, you can still deal a ton of damage.

On Offense, Giant + Baby Dragon + Valkyrie + Musketeer is the core setup of your pushes. You may want to keep your Valkyrie very close to Giant and Musketeer 3-4 tiles behind. If your opponent doesn’t play any card once your Giant has crosses the river and has passed a few tiles, It’s time you should drop Spear Goblins on your Musketeer as it’s most likely he is waiting to kill your Musketeer.

On Defense, Barbarians, Valkyrie and their combos are enough to deal with most split pushes. Musketeer and Baby Dragon can be additionally used to deal with big pushes. As mentioned before, your Barbarians should be used for only defending.

Hog + Freeze: This is a very strong and popular combo. Using Barbarians to deal with Hogs first is not a bad idea as your opponent would react by wasting a card to take down your Barbarians.
Spawn your Barbarians next to your Tower one Hog as soon as you see the Hog. They can hit the Hogs at least 2 times before getting freeze. Ready to use your Spear Goblins immediately once the opponent drops the Freeze. If you don’t have Spear Goblins, Musketeer or Valkyrie should be okay. We traded 8 Elixir and a few hits on the tower with 7 Elixir, but our troops are untouched. This is a pretty nice trade truly.

X-Bow Decks: Although X-Bow have been nerfed a lot but a lot of players are still using this strategy.
If the opponent sets up his X-Bow and defenses at the start, I usually drops the Giant next to my Tower, on the other land and start rushing.

Golem + Wizard: It’s the same as Giant push, use your Valkyrie to take town Wizard behind and use your Barbarians to take town Golem.

Dual Prince: Use Spear Goblins to break their charges then use Barbarians on them.

Ok guys I hope you like this deck. Don’t hesitate to comment If you need any help. Love you guys! 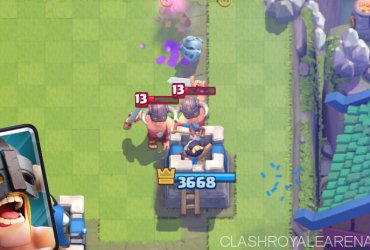 Hello guys it’s Ash and today I am going to show you the best Elite Barbarians decks I have been using these days. Since Elite Barbarian were released, I have … 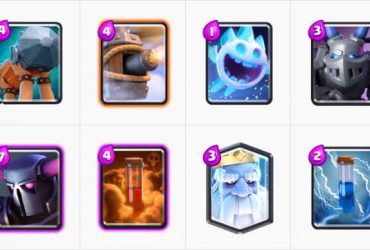 Hey guys, its Sans-action Toast here! This is my first ever guide in CRA, and I hope you guys like it.   In this deck, the playstyle is just like …