Hello guys, Today I am going to show you an amazing Arena 2 Deck which is pretty easy to use. This amazing deck is built around creating push that can’t be stopped by efficiently. Most of the time you can easily take a crown at starting If done properly. I have tested this Clash Royale deck for 2 days and successfully pushed from 500 trophies to 2100+ trophies in 3 days with my level 6 account (I dropped my trophies to 500+). I strongly believe this deck is extremely easy to use and you can make it to at least 1500+ trophies with it soon! 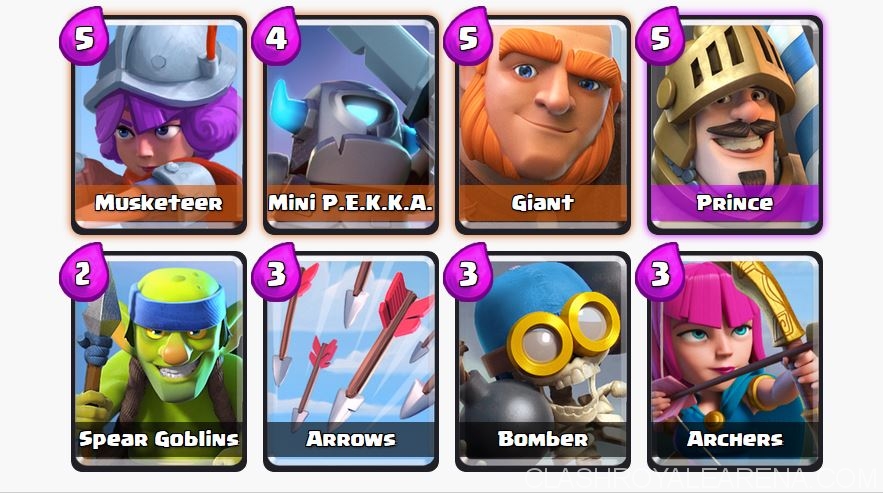 As shown above, cards I use in this Arena 2 Deck are: Archers, Bomber, Spear Goblins, Arrows, Prince, Giant, Musketeer and Mini P.E.K.K.A. The Prince is the key of this deck and he just can’t be replaced. I have seen a few similar decks which use Baby Dragon instead of Prince. Of course they are not good as this one but you may give it a try If you don’t have the Prince. I really want to see the report from you guys about this Baby Dragon deck!

In the battle you have 2 choices:

You may want to use a similar combo in both of these scenarios on offense. Most of the time, you should place your Giant behind your Tower in order to have enough Elixir so you can reinforce your push once Giant goes over the bridge. Musketeer + Prince + Giant is definitely the strongest combo of this deck you will want to build as it guarantees you an easy crown. You can see in the video below, YT-Jonnygoinham, the author of this deck, easily got a lot of crowns with this combo.

On defense, Spear Goblins, Bomber and Archers are definitely the keys for you. They have pretty low Elixir costs and allow you to cycle the deck quickly. Musketeer is also very effective at dealing with Balloons and Baby Dragons. Sometimes, you may want to use your Mini P.E.K.K.A to deal with Giants and Hog Riders, after that you can start launching the counter push with full HP Mini P.E.K.K.A.

The downside of this deck?

You can easily overwhelm a lot of players below Arena 6 with this Deck (my winrate was about 90% when I used this deck to push from Arena 2 to Arena 5).  The only problem of this deck I have seen so far is Golem deck. The best way I used to counter Golem decks was playing counter push the opposite site for an early crown and try to play defense the whole game.

Truly I don’t have much thing to say about this deck as It is very easy to use. If you can understand all these basic strategies, just start playing and enjoy this deck!

If you understand these basic strategies and when to use them, then you are well on your way to three crowning many unprepared players 😀 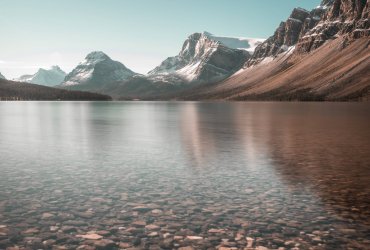 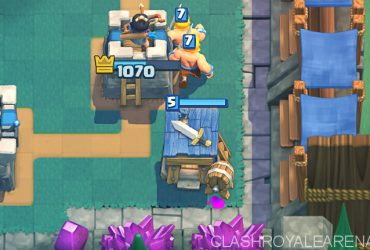 Today I wanted to talk to you about the Clash Royale Arena 5 Deck that I first took to legendary so long ago and did it again last week! I …