Hey guys, I recently Legendary Arena with my anti-splash deck for the first time and I thought that you might appreciate a guide! I have won the past 12 out of 25 games, lost 9 and drawn 4. This gives me a win rate of 57% (if you remove the draws). I consider myself to be pretty average at the game: I’m level 9 with level 9 commons/6 rares/3 epics/no Legendaries. This deck is very easy to build, especially considering I only run 2 epics, one of which is from the training camp and the other from arena 4. I’ve been playing this deck since I was at about 2300 trophies or so and won nearly every game up until the 2800/2900 mark, due to the level 10s you start to face. 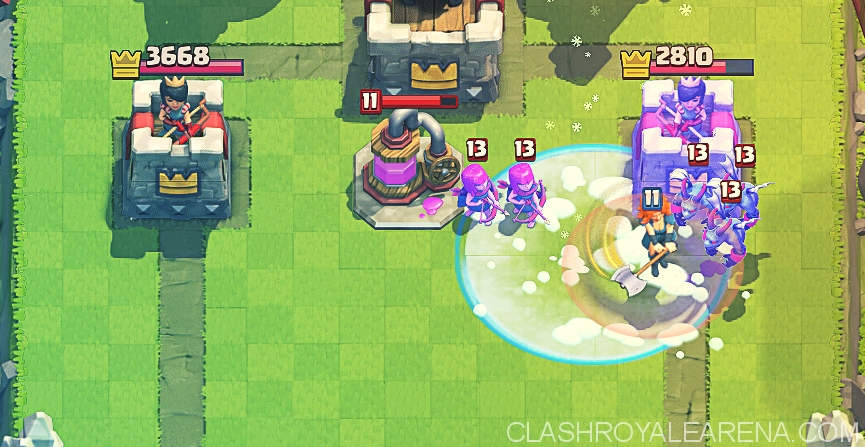 Anti-Splash Deck That Got Me to Legendary Arena

I call this deck the anti-splash deck for 2 reasons: It has 3 cards that deal splash damage (Valkyrie, baby dragon, zap) and it also contains only 1 troop that spawns in multiples (goblins). This has quite a few advantages. One of the most important ones being that arrows are awful in against this deck, as you’ll never gain Elixir in a trade when using it. This means that all decks using it have a dead card in their hand for the whole 3-4 minutes of the match. Since arrows are a very popular card, this happens quite often. Also, barbs are so easy to kill with this deck: the baby dragon and Valkyrie demolish them. Now, without further ado, the deck:

Goblins (2 Elixir) – These guys pack a punch and can deal a surprising amount of damage when paired with freeze. They are cheap, good for cycling/distracting and are just a really all-rounded card. The main reason I use these over spear goblins is because of the freeze and how much stronger goblins are compared to spear goblins. Another replacement for this would be the skeletons, but I prefer the beefier goblins.

Zap (2 Elixir) – I used to run arrows in this deck until I realised how they didn’t do a whole lot if you weren’t facing minion hordes/princesses. The zap can still deal with these cards relatively well while also having the added benefit of the 1 second stun. The stun is such a powerful tool that, when used correctly, can guarantee an extra hit or 2 from the hog on the tower. Also, a neat trick I learned while versing sparky decks is that the zap will reset the sparky’ shot, making them have to charge up again for another 5 seconds to get a single shot off. By then, you would’ve probably killed it. A game-winning card when used correctly, but can easily lose you it if you misstime the placement.

Hog Rider (4 Elixir) – This is the main pushing card of the deck. It’s fast, does quite a lot of damage and is just overall really balanced. When placed behind a baby dragon to tank, this card gets a lot of damage on the tower. The biggest weakness of this card is defenses placed in the middle of the map, but they can be taken care of easily with the musketeer or by waiting it out.

Musketeer (4 Elixir) – A really strong troop that is good on defense and offense, if protected. It can out-range cannons (which are very good against the hog), can kill tanks troops quite quickly and does a lot of damage to towers. I prefer this over the wizard because it is cheaper and has a larger range. Plus, this deck already has enough splash damage cards.

Valkyrie (4 Elixir) – A tank that deals splash, this card is really good because of the kinda recent buff. When on a push, barbs counter the hog incredibly but get stomped by the Valkyrie. On defense, this card is amazing and is still pretty decent for absorbing damage that would othersise be on your hog/musketeer. I prefer this over the knight/Mini-PEKKA/Barbs because of the splash damage and how all-rounded the card is.

Baby Dragon (4 Elixir) – One of my favourite cards, the baby dragon is the ultimate tank. For 4 Elixir, it has a considerable amount of health and although it doesn’t do a whole lot of splash damage, it does 1-shot goblins and spear goblins. This card could be replaced with something else, but the only thing I can see it being changed with is barbs, which ruins the whole anti-splash thing.

Freeze (4 Elixir) – Yes, the infamous freeze spell that so many people say needs a nerf/re-working. I’m not disagreeing. On offense, if you catch your opponent off guard, you can get a lot of damage on the tower with just a hog or even the whole tower if supported by a musketeer/Valkyrie. The place where this card shines, however, is defense. When your opponent places all of their troops in one huge cluster on offense, you can just freeze them and send in goblins/Valkyrie to kill everything. This has won me many games, as most people expect me to just use the freeze on offense. The card is so versatile and, as theRumHam pointed out a few weeks ago, the card gets immensely better as it levels up.

Elixir Collector (5 Elixir) – One of the best, if not the best card to start with. When placed in the middle of the map, it can distract most troops and force them to get hit by both towers at once. At the same time, this card also gives you some Elixir back, so after your opponent kills it with their hog, you would’ve already gained 1 or 2 Elixir back from the collector, resulting in either an even or positive Elixir trade. You could replace this card with a defensive building that does damage, but I prefer this because of how nutty the deck become when you have 2 of these down in overtime.

The best cards to start with in your opening hand are the Elixir collector, baby dragon or Valkyrie. I always place the collector in the middle of the map, so most troops are attracted to it. The only time this is not advisable is when you’re versing somebody of a higher level than you. The baby dragon/Valkyrie normally start at the back of the map, so I can build up a good push. Opening with a hand like freeze, zap, hog and goblins is really bad but it rarely happens, so don’t worry about it too much.

Always save the goblins for defense. When facing a pekka, mini-pekka, prince, hog, etc. the goblins are amazing counters due to their squishiness and high DPS. If you use your goblins offensively, you’re highly vulnerable to a counter attack on the other lane.

Never place troops in between a tower and Elixir collector because you could get blown out by a surprise fireball/lightning. It also ensures that splash damage troops don’t hit your troops and collector at the same time.

Lastly, don’t overextend. As hard as it may be to resist, try not to always make a huge push of baby dragon, hog, Valkyrie and musketeer. Doing this leaves you open to a counter push or split push so this is only advisable if you are in double Elixir.

Royal Giant.dek – At first, the royal giant might seem OP, but it really isn’t. Freeze is your saviour in this matchup, as hitting the royal giant + whatever else is behind him nets you so much advantage. It also leaves you with full-health troops for a counter push. Goblins + freeze obliterate the royal giant, whereas a Valkyrie in-between the giant and supporting troops kills them all. Be careful not to place the Elixir collector too far forward, or the royal giant will kill it while on the bridge.

PEKKA + Double-Prince (or as some say, the Pay-To-Win deck) – This is one of my hardest matchups ever. The deck punishes you so hard for overextending, so managing your resources carefully is the key to victory, or at least a draw. Keeping the goblins for the prince/pekka and a Valkyrie on the dark prince work pretty well, with a musketeer to support them. Ice wizard can be annoying, so try to get it to target the baby dragon.

OP Sparky deck – I’m gonna go out and say it: Sparky is not OP. No matter what you think, it takes too long to charge and is therefore easily counterable. A well-timed freeze/zap kills this card and leaves the deck with no defense.

Hog-Freeze deck – This matchup is very back-and-forth when it comes to pushing. The way to win this matchup is to make sure every push counts. If you use your freeze-zap on offense, make it count. Otherwise, save it to counter their hog + supporting troops.

Thank you to my clan mates who supported me on the way up and everybody who read this post. I hope it has been helpful and that you guys enjoy it. If you have any questions, feel free to ask. 🙂