Hey all! It’s Scarlett here, and as some of you may have heard, I am starting a new fanfiction series! This is my first fanfiction on Clash Royale, titled “A Cannon’s Dream”, and I really hope you guys will like it, as I literally spend hours each day writing it. I am still in the process of writing the story, and I am going to post them episode by episode. I’m not sure how many episodes there will be in total, but I will try to keep you guys up to date on this stuff. Well, hope you enjoy… 🙂 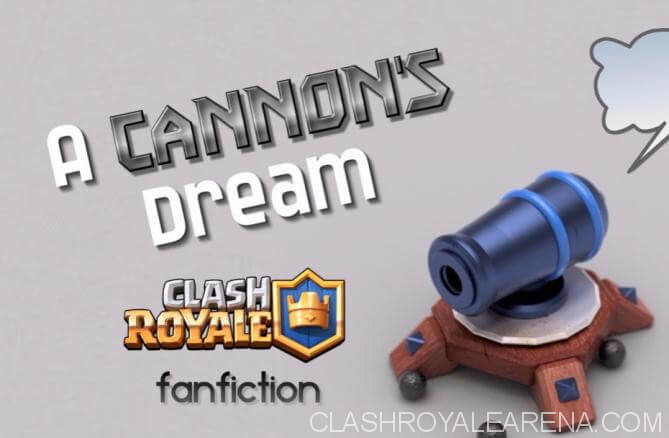 A Cannon’s Dream: Episode I

They created me from pure iron, perfectly polished, and packaged me inside a tiny silver chest. I was cramped pretty tightly, but I didn’t care, because I knew this was all part of my destiny. There was a paper taped to my back that read:

Defected Cannon: My apologies, we accidentally made a minor error in Danny’s programming. He has proved in our experiments to be highly intelligent for his kind, and unlike all other cannons, he actually has a brain, feelings, and emotions. We tried hard to turn him back into a normal cannon, but after several failed attempts, we couldn’t fix the bug.

This note kinda disturbed me, but it also complimented me at the same time. I was soon shipped to a stone castle, where a King opened the chest that I was trapped inside and carefully lifted me up and out of the chest. He read the note taped to my back silently, and smiled even harder. Beside the King were two princesses, who I believe were his daughters. I could tell by his joyful grin and his cry of delight he was happy to see me, and I couldn’t help but feel the same. After all, I had finally found a master.

“Welcome to the castle, Danny. I am King James IV, and these,” he said, pointing to the Princesses, “are my daughters, Hannah and Holly. Follow me, Danny, and I will lead you to your first practice battle.” King James motioned for me to follow him and led me through a narrow hall leading to a door which he slowly pushed open. I walked outside the door and was excited to see that I had been led to an area with fresh air, where the grass was so green and the sky so blue. Six stone towers were ahead of me, three coated in red and three in royal blue, and a red banner that read “Training Camp: Trainer Basil VS JamesTheGreat” was held high above the trees. Hannah and Holly each occupied one of the two smaller towers coated in blue, and the biggest tower was located between them.

I also saw a few friendly creatures sitting on a bench behind the biggest tower, including a scarlet-haired girl holding a double-bladed axe, a man with a mohawk sitting on the back of a pig,  a purple-haired girl wearing a metal helmet, and four bony skeletons. The king told me to sit with them on the bench, and I quickly listened, knowing that he was my one and only master now. I sat next to the pretty girl, with the solid metal helmet, purplish curls, and a musket held tightly in her arms.

“So the rules of the match are simple; we have to destroy the towers coated in red while protecting our own. Also, don’t worry about the elixir payments and that stuff; King James will take care of that. So this is the Training Camp, obviously, as I’m sure you can read the banner. Basically, King James takes us here to test our skill, and if he sees potential in you, you might just get the chance to battle in the Builder’s Workshop, in which I’m sure you will get the chance to,” Violet explained.

“What’s the Builder’s Workshop?” I asked in confusion.

“Oh,” she smiled. “That’s the name of the Arena we battle in. When we win a battle, we gain trophies, but if we lose, we lose trophies too. One day, I believe we will collect three-thousand trophies and be able to fight in the Legendary Arena, which is located on a floating island!”

I may have been a little over excited when I heard that I would have a chance to show my skill and possible battle in the Builder’s Workshop, for there was such a high possibility that I would screw up and ruin my biggest chance. Violet also introduced me to two of her friends, Scarlet and Joe, and she explained that she was a Musketeer, Scarlet was a Valkyrie, and Joe a Hog Rider.

“Wassup, Danny! You ready for your first battle in Training Camp?” Joe asked me.

“Oh, she’s always been cold with me. What I mean, Danny, is that during her first battle, she was so nervous that she dropped her axe, and out of embarrassment ran off the Arena. And this was in an actual battle where everyone was watching, not a Training Camp like this here. Sounds familiar, Scar?” Joe teased. Triggered as she was, Scarlet stepped up from the bench and threw a hard punch at Joe’s shoulder. He took one step back in alarm, and regained his balance after a few failed attempts.

“Geez, Scarlet. Chill,” Joe said, rubbing his shoulder. “I was just trying to make Danny feel more confident in himself, right my friend?” he asked, patting me on the back. “And also,” he added to Scarlet, “Do you not know how tough that fist of yours is? It seriously feels as if it’s made of iron. No joke.”

“Hey, Joe? Be thankful I didn’t use my axe. And by the way, lesson learned, eh? Don’t mess with me,” Scarlet shoved Joe again and then took her seat at the bench. Joe simply raised his eyebrows and muttered something I couldn’t hear.

When we were out of earshot from Scarlet, Joe whispered to me, “That girl is pure savage.” I nodded in agreement and sat down next to Violet after she was done conversing with the skeletons.

After we were settled, the King climbed onto his tower and the match began. I watched Violet and noticed how easy it was for her to shoot down the enemy troops. She swiftly shot down an entire horde of  Minions and then managed to get a few shots off of the enemy tower, until she succumbed to the tower’s arrows and left a pile of elixir on the grass. I was worried for her for a bit, but then she somehow spawned on the bench beside me again, and I was relieved to see she was unharmed. I was too busy watching Violet earlier that it took me a while to notice that a huge army of enemy skeletons were heading toward our tower! King James sent Scarlet onto the Arena, and she somehow destroyed the whole army with just a few spins of her axe. Then Joe was sent behind her and together they destroyed the first tower. They were amazing, alright, but they only made me more nervous. How was I supposed to be as good as them?

The king was calling out the players on the bench to get on the Arena one by one, until he finally pointed at me. I was a little anxious, but I took a deep breath, got off the bench, and planted myself between the two towers with Hannah and Holly on top. A purple-hooded lady with pink eyes, who I believe is the Witch, came walking towards me from the opposite side of the Training Camp. This was not too hard of a start, as I easily took down the Witch with my cannonballs, feeling really accomplished. Perhaps I shouldn’t have said that, for at that moment a Giant came along and soon enough, I disappeared and respawned at the bench.

The battle kept going on as usual, as after I respawn, I rest, and after I rest, I fight in the battle again. King James also occasionally sent random supernatural things onto the Arena, such as a fireball or a mini lightning bolt. The cycle continued until the match was over, and we beat the trainer three towers to none.