Hello I’m Ehsan aka San from Gaming w/aSan back with another guide on a deck which one of my clan mates recommended.  It’s the first time that I’m actually posting a Lava Hound deck because I just got Lava Hound from a Free Chest a few days ago, lucky eh? So, I went on looking for Lava Hound decks and my clan mate: Juggala (big shout out to him for this amazing deck.) recommended this one. 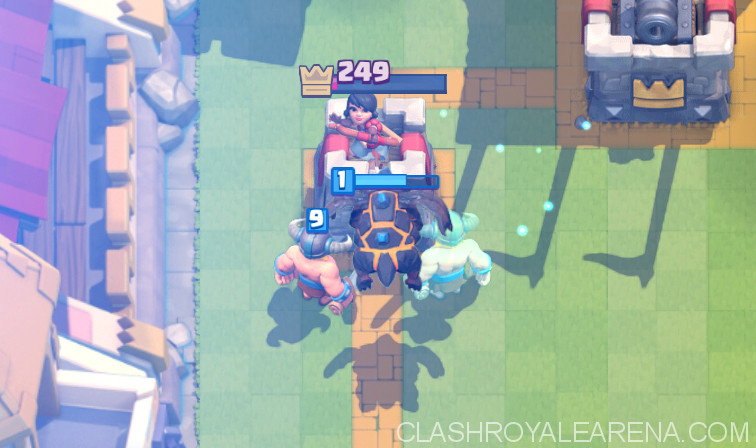 I already knew this deck because he has been using it for a long time and is sitting comfortably at 3700-3800 trophy range. But the two things that attracted me to this deck were the inclusion of two spells which is Zap and Arrows and the fun and craziness of this deck.

The first reason attracted me because after the balance changes it’ll be very hard to counter Zap Bait Decks as Zap has been nerfed. So, this deck pretty much counters Zap bait. I’ve played this deck too and got some decent wins against Zap Bait.

This deck consists of Lava Hound, Elite Barbarians, Three Musketeers, Clone, Elixir Collector, Zap, Arrows and Minions. I know this deck is expensive as its average elixir cost is 4.9 but if you practice well in friendly battles and classic challenges you’ll get to consume the fun and benefits of this deck.

A lot of chit-chat, so now without anymore let’s hop into the strategy of this deck.

Lava Hound: This card has been in the meta for a long time especially after the Balloon buff LavaLoon has become very famous. Great at soaking up damage and then when it dies it does hundreds of damage with the Lava Pups that pop out. So, since we have clone in this deck we very well know why Lava Hound is in this deck but that’s not it there’s a lot more left.

Elite Barbarians: Hmm, so what to say about this card. After the nerf of this card in 23rd January, I don’t think it’s going to disappear from the Meta it just now has become a bit more manageable. So, this guys deal hundreds of damage if left alone and are pretty hard to counter if you exactly don’t know how to. Great at defending as this deck almost has no defense if it has they are very expensive except for the Minions. But I explain later in the guide.

Three Musketeers: Yep, first the Hound then the Elite Barbs and now the Three Musketeers.(I know it’s getting pretty expensive.) Ignoring these ladies would be grave mistake. It’s more fun when you have taken down a tower (which I’m also going to explain later in the guide.) They are great at defense and also offense. They can shred tanks very fast.  Play these very strategically as many players may have fireball/lightning to counter them, so you want to catch your opponent off guard and get the best use out of them.

Clone: This card is one of the underrated cards not one of the most though because they are used in many kinds of decks. As I said earlier Clone plays a very vital role in this deck. You’re mainly going to clone your 3M, Elite Barbs and Lava Hounds. Very good to let almost dead troops to get some shots off for just 3 Elixir, clones everything except buildings. You’re not going to clone your troops always, just in certain situations which I’m going to explain later in the guide.

Elixir Collector: You guys know very well why this card is in this deck. So, in my opinion and many say that every deck over the average cost of 4.0 should contain an Elixir Collector. As this deck is 4.9 the Elixir Collector is used in it. I recommend using it if you have it on the starting hand and you should wait a second after reaching 10 Elixir, to know what your opponent plays  or if you don’t have it on the starting hand it’ll be a bit painful at first but it’ll be okay when you’ve defended against a push and can afford a pump. I don’t recommend using a pump on serious situations like 2x Elixir Time when you’re winning and you have really low hp on your tower and you don’t want your opponent to rush your tower (unless it’s a Tournament or a Challenge.)

Zap:  This card is in almost every deck since the addition of a stun effect. It has been nerfed twice some months ago and another recently which is going to affect the meta severely. Because Zap baits decks are getting better and better and now after this damage decrease Goblin Barrels will be the new meta. But even after that severe nerf , this card is in this deck because of the possibilities of the rise of Sparky or any card that can be countered very easily with Zap.

Arrows: Now, the reason why I said this deck is good against Zap Bait decks because it contains both Arrows and Zap. After the damage nerf of Zap it cannot kill Goblins of the same level because of this fact Zap Bait decks are going to get a big advantage. So, when your opponent baits you Zap or Arrows you’re going to show em’ who’s the real boss, xD.

Minions: Very Cheap, fast and spit dark elixir, these guys counter a wide variety of cards. Don’t play against air targeting splash or these guys will vanish. Deal lots of damage, if behind a tank or not being targeted by any other troop or building. Good in both defense and offense. You can use them behind the Hound if you don’t have anything else to support the Hound. Better than the Mega Minion because they have a better dps. But Minions can be replaced with Mega Minion because it also can be used to support your Hound.

On offense, you have to try to attack your opponent with different and strange kinds of pushes.

Make big pushes only when you have your Pump down and at decent health or you might get hit by a big counter push by your opponent.

So, when you have taken down a tower and at full elixir and having a pump, surprise your opponent by throwing the Three Musketeers in your opponent’s map, just the place where only one tower attacks them. If your opponent doesn’t handle them properly then that tower is going to lose hundreds of damage or even go down but I recommend this only on 2x Elixir or when you have a pump down because it’s very risky but gives very good value at times.

Now, let’s get to the Cloning part, when your Lava Combo reaches the tower you’re basically going to clone the Lava Hound just before dying and wait to see what your opponent does against it. Or when you have a large number of troops behind the Lava Hound I recommend to try to Clone as much as troops possible because if 3M, Lava and Elite Barbs get together by any chance and you clone them It’s going TO BE UNSTOPPABLE unless they rocket everything down but that won’t be possible as they would’ve already spent most of their elixir.

You need a lot of practice to play this deck as its super expensive, needs a lot of concentration and you’ve got to think many times before a playing something really expensive. Make sure you do all these high elixir pushes with you Pump down never forget to play your pump or else you’ll be in trouble.

On defense, you have to be very cautious about what you do on defense. First thing, never over-commit on defense because that might cost you the game. Try to use the cheapest counter possible.

So, guys this was it for my 3M Elite Lava Clone Deck, I know after reading this guide you are going to think it very expensive and might not work but I’m telling you just try it and you’ll love it.

The last tips would be same as usual, not to panic, play very cautiously and make sure you have those PUMPS going and you’ll be good.

Thanks for taking time to read this guide, hope you liked it and comment down below for any more info or suggestions. You can also check out my YouTube Channel at here.